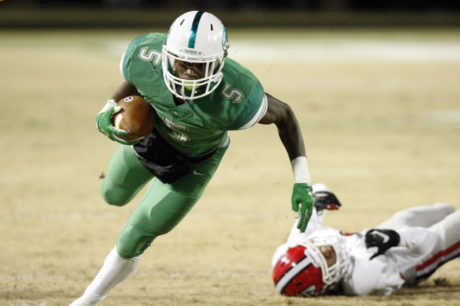 Buford (GA) Buford running back Christian Turner committed to Michigan on Monday afternoon. He chose the Wolverines over offers from Louisville, Miami, Michigan State, Nebraska, Notre Dame, and Wisconsin, among others.

Hit the jump for my thoughts on Turner.

Michigan’s recruitment of Turner has been relatively swift, though not lightning quick. The Wolverines offered in late February, and he took an unofficial visit to Ann Arbor this past weekend. He also visited Notre Dame on the midwest swing, and rumors came out of it that he had silently committed to the Fighting Irish. However, just after visiting South Bend, the Wolverines won him over. He privately pledged to the coaching staff while taking another couple days to make it public.

Turner is a nice little piece of the 2018 class. I think he’s a well rounded back, and I generally like running backs to be in that 5’11” range. He plays in a pro-style offense similar to what he’ll see in Ann Arbor, so the footwork and reads should be fairly similar. He runs a lot of inside zone, outside zone, and power. Turner gets downhill quickly, keeps his shoulder pads square to the line of scrimmage, and runs behind his pads when necessary. The vision is there to plow straight ahead or see the cutback lane, and he has quick enough feet in the hole to take his body where his mind goes. He’s tricky enough in the open field to keep defenders guessing about whether he’ll cut back, power through a tackle, or try to turn on the jets.

One thing (or two) lacking from his highlights is his play in the passing game; there’s no indication of whether he can catch the ball out of the backfield or pass block. He runs hard through contact, but he’s a little bit light and needs to gain strength in the lower body, so pass blocking may be an issue, at least early in his career. He also seems to lack that extra gear of speed; he’s more quick than fast.

Overall, he’s not a game-changer, but he’s a solid complementary back. I don’t think he’s quite as shifty, but he reminds me of Fitzgerald Toussaint with his size, running style, and overall athleticism. Toussaint had a solid Michigan career – whenever the offensive line wasn’t terrible – and has hung around as a backup in the NFL. I think ESPN and Rivals have him ranked generally in the right area, and while Scout is one of the better recruiting sites, I disagree with having him ranked as the #72 overall back.

Michigan now has five committed players in the 2018 class, three of whom are from Georgia (Turner, CB Myles Sims, and S/LB Otis Reese). They join DT Aubrey Solomon and RB Kurt Taylor from the 2017 class as Peach State natives, and Michigan seems to be making inroads in a very talented state. Aside from the traditionally powerful football programs in California, Florida, and Texas – states that are talked about constantly – I have to say that I have found the talent in Georgia to be tantalizing.

Buford High School is a powerhouse program in one of the middle classifications of Georgia, with just over 1,100 students. They consistently push out talent, and they have won seven state championships in the last decade. Michigan has not traditionally recruited Georgia well, but Buford would be a great place to get a toehold.

Michigan has roughly ten spots open in the 2018 class (LINK), though that number will obviously increase with early departures of various kinds. I expect the Wolverines to continue pursuing elite running back options, but after taking two in 2017, they don’t need to reach for another prospect at the position.