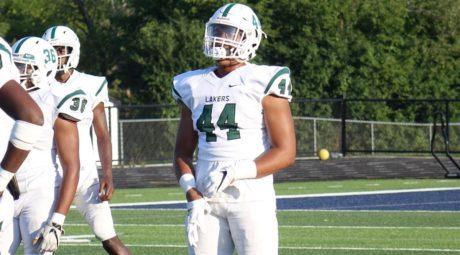 West Bloomfield (MI) West Bloomfield linebacker Cornell Wheeler committed to Michigan on Tuesday afternoon. He chose the Wolverines over offers from Indiana, Kentucky, and Missouri, among others.

Hit the jump for more on Wheeler’s commitment.

Michigan has been recruiting West Bloomfield pretty heavily over the last couple years, though they missed out on linebacker Lance Dixon (Penn State) in the 2019 class. Michigan offered a few underclassman prospects from there in Wheeler, safety Makari Paige (2020), and running back Donovan Edwards (2021). The head coach at West Bloomfield is former Michigan wide receiver Ronald Bellamy. After being offered over the winter, Wheeler took several visits to Ann Arbor and committed after visiting for the Nebraska game.

Wheeler is a little on the short side for a linebacker at the elite level, but Michigan likes inside linebackers who are around 6’0″ tall. He’s thickly built with a strong lower body. Wheeler is a downhill linebacker who doesn’t waste a lot of movement, and he chases well from sideline to sideline. He’s also a powerful hitter who plays with good leverage and knee bend, and he should be a plus tackler at the next level.

I would like to see Wheeler really work on his speed and explosiveness before he hits campus. There is little film of him dropping into coverage – either man or zone – so it might be assumed that he needs work in pass coverage. Either way, I would like to see a little more of him against the pass before deciding whether that’s a weakness or a strength.

Overall, I like Wheeler but I don’t see him right now becoming a superstar linebacker like Devin Bush, Jr. With his stance and playing style, he reminds me a little bit of former Michigan inside linebacker Desmond Morgan, who had a solid but unspectacular career in a Michigan uniform. Wheeler is probably limited to WILL or MIKE, one of the inside linebacker spots, because he lacks the athleticism to play the Viper spot.

Michigan now has four commitments in the 2020 class: Wheeler, WR Kalil Branham, TE Nick Patterson, CB Andre Seldon, and DT Denver Warren. By the time Wheeler would hit campus, starting inside linebackers Devin Bush, Jr. and Devin Gil will have exhausted their eligibility. There may be an opportunity for early playing time, depending on the development of Drew Singleton, Joshua Ross, Jordan Anthony, and 2019 commit Charles Thomas. Wheeler would be the first West Bloomfield product to play for Michigan since walk-on lineman Anthony Kay was on the roster in the 2016 season.

TTB Rating: I won’t be giving a TTB Rating until the 2019 class is completed