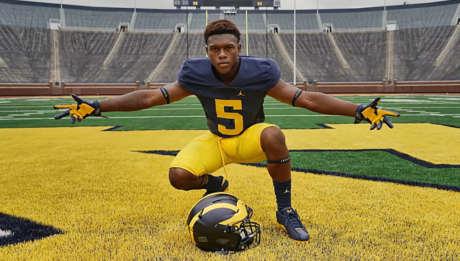 Giles Jackson (image via Land of 10)

Oakley (CA) Freedom athlete Giles Jackson committed to Michigan on September 10. He picked the Wolverines over offers from Cal, Florida, Oregon, and USC, among others. I, however, was extremely busy when he committed and didn’t have time to put together a post until now (note: I’m writing this at 4:32 a.m. because I can’t sleep).

Hit the jump for more on Jackson’s commitment.

Jackson was offered back in the spring, and he took an official visit in June. He was a 7-on-7 teammate of Michigan quarterback commit Cade McNamara, and McNamara recruited him hard. Jackson visited Oregon and Oregon State unofficially in the meantime, but he decided on Michigan, says he’s shutting down his recruitment, and plans to sign in December.

The rankings are all over the place, so before giving an evaluation, I think it’s important to establish where I think he’ll play at the next level. 247 Sports has him as a wideout, Rivals ranks him as an all-purpose back, and ESPN puts him in the broad “athlete” category. I don’t see him having the frame or skill set to play running back at Michigan, though that wouldn’t prevent him from lining up in the backfield on occasion. He looks to me more like a slot receiver and returner.

As a receiver, Jackson’s frame is a non-issue. He’s not thickly built, even on his senior film, which makes me question the 185 lb. listing. Jackson often lines up as a wide receiver, and he shows great short-area quickness. He does a good job of catching the ball away from his body, and he shows excellent awareness of zone defenders when turning upfield. He has very good speed and balance.

On the negative side, Jackson could afford to improve his route running for the receiver position. And if he does play running back, he will need to add weight, get more physical, and show that he can pass block.

Ultimately, I think Jackson could be a dynamic player with the ball in his hands as a receiver and returner. He also has the hips to play cornerback. Michigan does not have a lot of wide receiver depth, and Grant Perry will graduate after the 2018 season, so there’s a chance that Jackson could come in and contribute immediately. Michigan currently has two other receiver types in the 2019 class, Quintel Kent and George Johnson III, who could also vie for time next season.