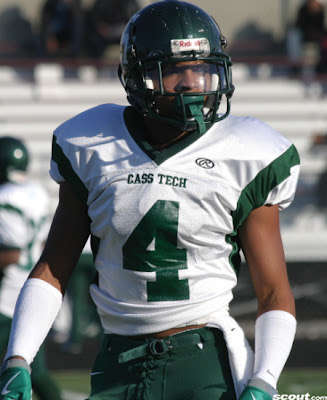 Hollowell is listed at 5’8″ and 163 lbs., so he follows in the line of midget cornerbacks that Michigan has recruited out of Cass Tech. Class of 2008 cornerback Boubacar Cissoko, class of 2009 slot receiver/cornerback/slot receiver Teric Jones (who’s moving back to offense for the spring), and class of 2010 cornerback Dior Mathis (committed to Oregon) were all listed in that 5’8″ range. Their one Big Ten-worthy defensive back who hasn’t been offered by Michigan is Daniel Easterly, who’s 6’4″ and headed to Missouri this year.

Hollowell is Michigan’s second commit overall – and second cornerback commit – of the 2011 class. Greg Brown, from Fremont, OH, committed back in September. With at least three cornerbacks in the 2010 class and anywhere from 3-5 safeties, don’t expect Michigan to pursue many more defensive backs in 2011. They’ll probably go hard after safety Ron Tanner, from Columbus, and that might be it.

As with most short cornerbacks, I’m not a big fan of the Hollowell commitment. Short cornerbacks automatically have issues with bigger receivers, and Michigan seems to be recruiting a lot of them recently. I wasn’t enamored with either Cissoko or Mathis when they were coming out of high school (Teric Jones only played offense), but I’d take both of them over Hollowell. He lacks the elite athleticism and speed that the other two seemed to have. Hollowell does have excellent hands and adjusts well to the ball when it’s in the air. But I’m afraid that bigger and/or faster wide receivers will give him trouble at the next level.