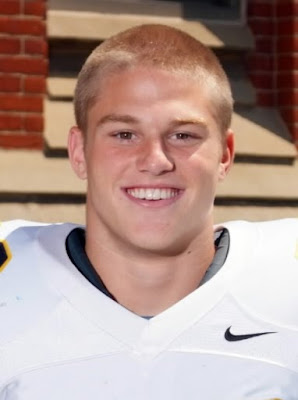 Everyone smiles when they leave Ohio
Jake Ryan, from St. Ignatius High School in Westlake, OH, committed to the University of Michigan on Sunday. Ryan is a 6’3″, 225 lb. linebacker and Michigan’s ninth defensive commitment of the last ten. He’s rated as a 3-star recruit by both Scout and Rivals.

Ryan’s teammate, Scott McVey, was the more heavily recruited player at St. Ignatius, but Ryan outplayed him during their 2009 season. McVey had an offer from Michigan but chose Ohio State and, thus jinxed by God, suffered nagging injuries as a senior. While McVey played middle linebacker in St. Ignatius’s 3-3-5 stack defense, Ryan mostly played right outside linebacker.

Other schools to offer Ryan included Bowling Green, Toledo, Ohio, and Eastern Michigan. But when he officially visited this past weekend, Rich Rodriguez extended an offer that got accepted almost immediately.

In interviews with Ryan and his high school coach, they have said that Michigan recruited him as outside/rush linebacker. That seems to be in line with the Quick end position, currently manned by rising sophomore Craig Roh. However, that seems odd, considering that no less than four other players in the class of 2010 have been recruited to play Quick at various times: Jordan Paskorz, Ken Wilkins, Antonio Kinard, and Davion Rogers. A recent Rivals article quotes Kinard as saying he’ll play WILL, so that makes a little more sense. And personally, I think Paskorz is better off as a defensive end. But still, I have questions.

Regardless, I think Ryan is best suited for middle linebacker. He seems to do a good job of diagnosing plays and taking good angles toward the ballcarrier. He has a solid frame and could easily play at 240 or 245. He’s reported to run a 4.6 forty yard dash, but I question that time.

Ryan is stiff in the hips. He moves well for a high school linebacker, but he looks like a defensive end who’s playing out of position at outside backer. He does not have great lateral speed, and I do question his tackling ability. Despite a couple highlight films I’ve seen, I haven’t seen a single de-cleater. All of his tackles seem to be him falling on a player who’s already going down or grabbing a runner and letting his 220-225 lbs. drag down the ball carrier. He doesn’t have the aggressiveness I would like to see in a kid that size at the linebacker position, but he was suffering from a wrist injury, so that might have made him a bit tentative.

Ultimately, Ryan is either a Quick linebacker or a MIKE. I’m leaning toward the MIKE position because of the shortage of inside linebackers on the roster, but it won’t surprise me either way. No other player who was recruited for the Quick position has the ability to play middle linebacker, so either Ryan plays there or Michigan better go after some good inside linebackers in 2011.

Image via the Cleveland Plain Dealer.