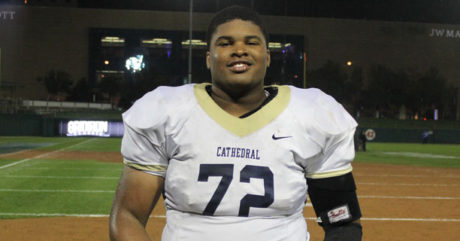 Indianapolis (IN) Cathedral OG Emil Ekiyor (image via Today’s U)

Indianapolis (IN) Cathedral offensive guard Emil Ekiyor, Jr., a 2018 prospect, committed to Michigan on Sunday. He chose the Wolverines over offers from Auburn, Florida, Florida State, Georgia, LSU, Oklahoma, Tennessee, and USC, among others.

Hit the jump for more on Ekiyor.

Those ratings are all surprisingly similar. He’s anywhere from the #3 to #5 offensive guard and between #124 and #131 overall, with two sites ranking him at #131. Sometimes you see similar rankings near the top, but once the lists get into the hundreds, you rarely see such agreement.

Michigan’s staff offered him following his freshman season, and they were the first school to offer. He had been close to committing earlier in the process, but he was advised to hold off in order to enjoy the recruiting process and make a sound decision. Ekiyor’s father – Emil Ekiyor, Sr. – was a defensive end at Central Florida before spending a bit of time with the Atlanta Falcons in the 1990’s.

I’m impressed with the younger Ekiyor’s ability to stay low. Granted, he’s only 6’2″ or 6’3″, but he bends well without getting overextended, and he maintains leverage against defensive linemen. He has a good initial punch, drives his feet after contact, and shows good hand placement. His very large frame allows him to drive opponents off the ball, even if he’s unable to square them up for a direct shot.

On the negative side, Ekiyor isn’t the fleetest of foot and could struggle against quicker guys on the edge. He plays right tackle at times, though he’ll be a guard or center in college, and he’s pigeon-toed, which means he’ll struggle a little bit to move laterally. That’s less of a concern for an interior guy than a tackle. He could probably afford to reshape his body a little bit, and he’s listed in some places as heavy as 344 lbs.

I see some Michael Onwenu in Ekiyor. Both have giant frames with their weight spread proportionately from head to toe. Onwenu was supposedly around 370 lbs. at one point, and Ekiyor’s weight is pretty high up there, too. He carries it pretty well, but he needs to get faster on his pulls for college. He should be a guy who can play fairly early because he’s well coached and already has the frame to contribute at the next level.

Ekiyor is the second commitment in the 2018 class, joining Georgia outside linebacker Otis Reese. The class is supposed to be a bit smaller than the previous couple, since there are just 13 players in the junior class (see here) who will be graduating after next season. The Wolverines can probably afford to be a bit picky, but if you can get a top-5 guard at this juncture, then you go for it. Ekiyor is a teammate of 2018 running back Markese Stepp, a 2018 Notre Dame commit who also visited this past weekend, and 2017 linebacker Pete Werner (Notre Dame).

TTB Rating: I won’t give a TTB Rating until after the 2017 class signs