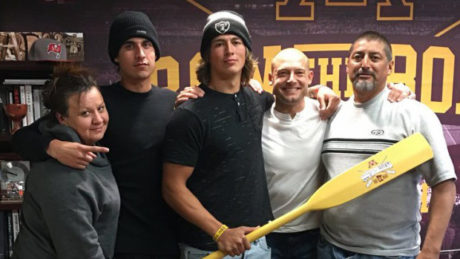 George Campbell, WR (Florida State): Campbell made 6 catches for 122 yards in four games before suffering a recurring injury to his abdominal region. He’s expected to be a backup wide receiver this year.

Chris Clark, TE (Pittsburgh): Clark had 16 catches for 122 yards and 1 touchdown last season as a backup and part-time starter. Now he’s expected to be the starting tight end this fall.

Te’Cory Couch, CB (Miami): Couch has committed to play at Miami in the class of 2019.

A.J. Dillon, RB (Boston College): Dillon will be the starter at BC after he finished last season with 300 carries for 1,589 yards (5.3 YPC) and 14 touchdowns; somehow he managed to avoid catching a pass the entire season. He was named ACC Freshman of the Year.

Kevin Doyle, QB (Arizona): Doyle will be a freshman at Arizona this fall.

Jordan Elliott, DT (Missouri): Elliott is listed as a 6’4″, 325 lb. defensive tackle at Missouri after sitting out the 2017 season due to NCAA transfer rules. As a redshirt sophomore, he’s projected to be a backup defensive tackle.

Matt Falcon, RB (Western Michigan): Falcon played in just one game last season and ran 10 times for 37 yards. Unfortunately, he has been medically disqualified to continue playing at WMU due to the same knee injuries that caused Michigan to disqualify him, as well.

Devery Hamilton, OT (Stanford): Hamilton is expected to be the starting left tackle for the Cardinal this season.

Dele’ Harding, LB (Illinois): Harding made 32 tackles last season and is now listed as a 6’1″, 235 lb. linebacker. He’s expected to be the starting middle linebacker.

Kai-Leon Herbert, OT (Miami): Herbert is expected to be competing for the starting right tackle position for Miami as a redshirt freshman in 2018.

Jeremiah Holloman, WR (Georgia): Holloman made 1 catch for 7 yards while playing in five games for the Bulldogs last year, and he’s expected to be the #2 split end this fall.

Darrin Kirkland Jr., LB (Tennessee): Kirkland missed the entire 2017 season due to injury and made some noise this off-season about transferring. However, that relationship seems to have been repaired, and he is expected to return for the upcoming year.

Chase Lasater, TE (Florida Atlantic): Lasater is listed as a 6’2″, 235 lb. tight end after being recruited as a fullback/linebacker by Michigan. He’s a redshirt freshman.

Ahmir Mitchell, WR (Arizona Western): Mitchell transferred from Michigan to Rutgers, tore his ACL, and then was dismissed from Rutgers. He announced recently that he would be heading to Arizona Western, a fairly common destination for big-time recruits trying to resurrect their careers.

Otis Reese, LB (Georgia): Reese will be a true freshman linebacker at Georgia this fall.

Darian Roseboro, DE (North Carolina State): Roseboro made 33 tackles, 7 tackles for loss, 2.5 sacks, 1 fumble forced, 2 pass breakups, and 4 quarterback hurries for 9-4 North Carolina State last season. He is once again expected to be a starter for the Wolfpack this fall.

Erik Swenson, OT (Oklahoma): Swenson played in three games during the 2017 season for Oklahoma. He is expected to be a backup at one of the two tackle spots going into 2018.

Garrett Taylor, S (Penn State): Taylor is slated to be a backup strong safety this year. He’s listed as a 6’0″, 200 lb. redshirt junior.

Vic Viramontes, QB/LB (Riverside City College): Overall last season, Viramontes was 92/151 (60.9%) passing for 1,243 yards, 18 touchdowns, and 6 interceptions. He also ran 146 times for 1,210 yards (8.3 yards/carry) and 16 touchdowns. In one of the more interesting developments in this whole piece is that he transferred to Minnesota to compete for the starting QB position, but coming out of the spring semester, he decided to transfer back to Riverside City College to transition to linebacker. He will presumably try to transfer to an FBS school again next season.

Rashad Weaver, DE (Pittsburgh): Weaver made 28 tackles, 6 tackles for loss, 3 sacks, 3 pass breakups, and 6 quarterback hurries last season. He is expected to be a backup defensive end once again this season.

Mike Weber, RB (Ohio State): Weber finished last season as OSU’s third-leading rusher with 101 carries for 626 yards (6.2 YPC) and 10 touchdowns, plus 10 catches for 94 yards (9.4 yards/catch). The senior is expected to be the backup to sophomore J.K. Dobbins this fall.

Jedd Fisch, Senior Offensive Assistant (Los Angeles Rams): Fisch was passed over as the head coach at UCLA, so he took a job in the NFL.

Darrell Funk, Offensive Line Coach (Indiana State): Funk is no longer at Indiana State as the offensive line coach, though I can’t find whether he continues to coach. His son Tyler is the tight ends coach for the Sycamores.

Brady Hoke, Defensive Line Coach (Carolina Panthers): Hoke was passed over for the head coaching job at Tennessee after going 0-2 as the interim head coach. He is now the defensive line coach for the NFL’s Carolina Panthers.

Curt Mallory, Head Coach (Indiana State): The Sycamores went 0-11 in 2017, and now Mallory heads into his second season as the head man.

Roy Manning, Special Teams Coordinator (UCLA): Manning was hired as the special teams coach at UCLA after the season, where he will be working with new head coach Chip Kelly.

Jerry Montgomery, Defensive Line Coach (Green Bay Packers): Montgomery finished his third season as an assistant for the Packers and was then hired by Texas A&M to be their defensive line coach and assistant head coach, but then he left to head back to the Packers after two weeks.

Rich Rodriguez,  (): Rodriguez was fired from Arizona after a 7-6 season that included three straight losses to close the year. He went 43-35 there over six seasons, including a 24-30 record within the Pac-12 conference. Oh, and he also was hit with allegations of sexual misconduct (LINK). After he was fired and everything became public, he gave a speech to the American Football Coaches Association, since he’s the outgoing president of the AFCA. Awkward… He is still unemployed at this point.