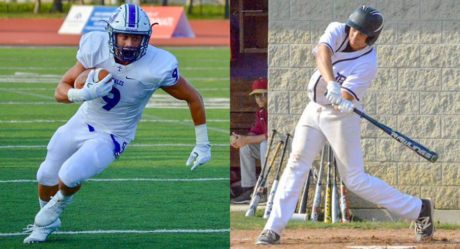 Columbus (OH) St. Francis DeSales linebacker/safety Joey Velazquez committed to Michigan on Friday morning. He had previously been committed to Ohio State to play baseball only. He picked the Wolverines over Cincinnati and Indiana, among others, and he plans to continue his baseball career in Ann Arbor as well.

Velazquez is listed at 6’0″, 205 lbs. As a baseball player, Velazquez has been timed at 6.84 in the 60, and his throwing velocity has been measured at 85 miles per hour as a left-handed outfielder. His measureables are even more impressive when translated to football, where he has a 4.54 forty, a 390 lb. bench press, a 570 lb. squat, and a 600 lb. deadlift. He ran for 356 yards and 7 touchdowns on offense as a junior, and he made 50 tackles, 2 interceptions, and 4 pass breakups on defense.

Hit the jump for more on Velazquez’s commitment.

Velazquez wasn’t on recruitniks’ radar until Michigan offered when he visited campus in April. The coaching staff decided they liked him as a Viper prospect and kept pursuing him as one of their top prospects for the Viper position, which is a hybrid safety/linebacker. West Bloomfield (MI) West Bloomfield’s Lance Dixon was reportedly their top target at the position, but the Wolverines are playing from behind with Penn State and Wisconsin out front. Velazquez is visiting Michigan this weekend, and he decided to commit on the visit.

Velazquez is a solidly built hybrid player. He has decent height and a good frame, and he should be able to carry some additional weight without sacrificing mobility, perhaps topping out at 215-220 lbs. He’s a very physical player, which you can see when he takes on pulling linemen multiple times and puts them on the ground with a shoulder. As a tackler he does a nice job of getting low and running his feet. He shows some good anticipation and timing in zone coverage and changes direction well to break on balls thrown underneath.

On the negative side, Velazquez is sometimes uncertain when diagnosing run vs. pass and can get stuck in No Man’s Land. His man coverage skills could use some work, and that probably won’t be a huge strength for him because he doesn’t have extremely fluid hips.

Overall, Velazquez is a very good all-around athlete. He has the skills one would want in a hybrid linebacker – the ability to take on blocks, tackle, blitz, and cover a little bit. If Michigan were recruiting him for a true safety position or a WILL linebacker spot, I probably wouldn’t be extremely high on him, but he should fit in well at the Viper position.

Khaleke Hudson will be a senior (or in the NFL) by the time Velazquez arrives on campus, and there is no heir apparent currently on the roster for the Viper position. That means Velazquez could play very early in his career. Michigan doesn’t over-recruit the Viper spot, so there will probably only be 2-3 potential players at the position at any given time. In some ways, that guy is the stud player on the defense who racks up all kinds of gaudy numbers, just like Hudson and Jabrill Peppers have done over the past two seasons.

Michigan now has 11 commits in the 2019 class, and Velazquez joins Charles Thomas as the only two linebackers in the class so far. Michigan is also recruiting 2019 defensive tackle Rodas Johnson from DeSales. Michigan has landed a couple players from DeSales in the past decade or so, including defensive end Chris Rock (who transferred to Ohio State as a walk-on) and offensive guard Patrick Omameh (who has had a decent NFL career). Earlier this week, Michigan landed another player from Columbus in 2020 wide receiver Kalil Branham (LINK).