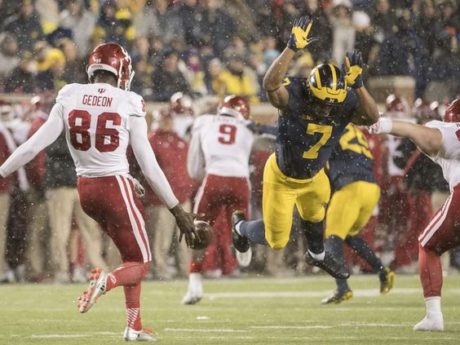 HOW DOES BRANDON PETERS LOOK?
The Maize Team will be quarterbacked by Wilton Speight and presumed #2 guy John O’Korn, which leaves redshirt freshman Brandon Peters as the signal caller for the Blue team. Did the Maize team draft two quarterbacks to prevent the Blue team from having a competent quarterback? Or did the Blue team truly rank Peters above O’Korn? O’Korn and Peters have reportedly gone back and forth at times during spring practices, but it would be a significant step forward for Peters if the coaches think he’s the #2 option. After all, O’Korn has started numerous games in his career at Houston and then against Indiana last season.

CAN KHALEKE HUDSON APPROXIMATE JABRILL PEPPERS?
Peppers rarely came off the field on defense last season, playing linebacker, safety, and cornerback. Hudson is taking his job at Viper this year, and he’s received a lot of rave reviews from practice observers. He was also a top-five pick in the spring game draft. Peppers didn’t have a stellar spring game in 2016, partly because Michigan didn’t do things on offense that opened things up for Peppers to do his best work. I imagine we’ll also see Michigan be conservative this year on O, so Hudson may not look like a star – but I’m excited to see how he looks with a year under his belt.

HOW MUCH HAS PATRICK KUGLER IMPROVED?
Kugler, a fifth-year senior, has played some guard and some center in his career. He hasn’t lived up to the expectations he had coming out of high school, but shoulder problems have contributed to him lacking the strength to hold up in the middle. Last year he was healthy for most of the year, and it’s not a coincidence that he played better than in previous years. He has been the primary center this spring, and we all want to see him succeed. Please look good, Kugler. Please.

HOW BIG WILL THE DROP-OFF BE IN THE DEFENSIVE BACKFIELD?
Michigan lost five seniors in the defensive backfield, and that doesn’t include part-time defensive back Jabrill Peppers. The Wolverines will have new starters at every spot. Sophomore cornerback David Long, Jr. and junior safety Tyree Kinnel have received very positive reviews this spring. Furthermore, some believe that freshman Ambry Thomas – who’s in the running to be the nickel corner – might end up being even better than All-American Jourdan Lewis. There’s a lot of talent in the defensive back group, but the talent has also been upgraded at quarterback and there’s more depth at wide receiver. Sophomore cornerback Lavert Hill and sophomore safety Joshua Metellus should fill out the group. Since defensive backs play on an island more than a lot of other positions, we should be able to get a good feel for how well these guys can fill the shoes left behind by Michigan’s best secondary in a long time.

HOW DOES THE KICKING GAME LOOK?
Special teams gossip rarely comes out of practice reports, so the one chance we get to find out about the kicking game is at the spring game. We should finally get a chance to see kicker Quinn Nordin in action after he redshirted in 2016, and walk-on Ryan Tice also figures to get a chance. We won’t see true freshman punter Brad Robbins, who has yet to arrive on campus. The Wolverines figure to have a tougher time scoring points in 2017 after losing three linemen, their top two wideouts, the country’s top tight end (and his backup), and a starting running back, so more games might come down to a field goal and field position.