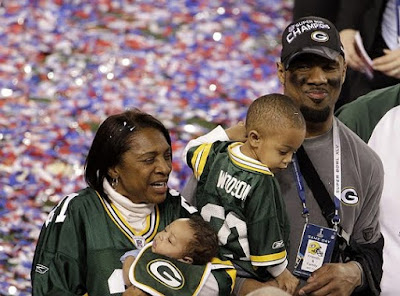 Charles Woodson owns a Super Bowl ring as well as a Heisman Trophy. And after his performance this Sunday, he also owns the bragging rights to this here TTB award for the second time in three weeks. His children must be proud.
Woodson turns 35 years of age on tomorrow (10/7/11), yet he continues to give Old Father Time a run for his money. Against the Broncos, he scored on a 30 yard pick-six in the first quarter and also tallied four tackles, which helped his Packers earn a 49-23 victory in week four. Woodson is now only one trip to the endzone away from co-owning the NFL record for most touchdowns scored by a defensive player (12). That record is currently held by former teammate and fellow Woodson, Rod, although the two players are not related.