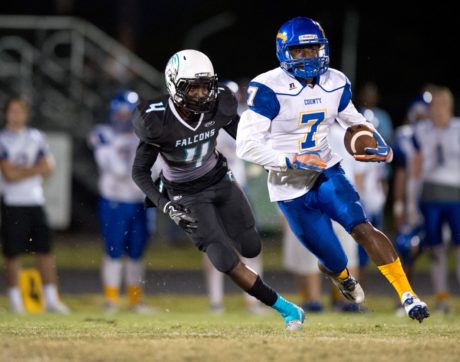 Michigan wasn’t in on Johnson until they offered in late May. He responded by scheduling an official visit for this past weekend, which resulted in a commitment.

Johnson plays mostly quarterback for his high school team, so wide receiver is a bit of a projection. He’s a dual-threat quarterback who could have gone to Georgia Tech to be their QB in the 2019 class. I can see why GT would like him at quarterback, but for those wondering whether he could be a quarterback at a place like Michigan, I doubt it. His lack of height is working against him, and he’s late on a lot of his throws, probably because he just doesn’t read the field extremely well right now.

He does have excellent vision and feet to play wide receiver and generally be an offensive weapon. He could also be a punt returner. He’s a plus athlete who can make people look silly in the open field, and he does a nice job of setting up defenders and blocks. I especially like his ability to plant his outside foot and get vertical, which can make it tough to box him in. He’s fairly strong for his size and can shed arm tackles, although he’s never going to be a huge guy.

Johnson’s top-end speed is a little bit lacking, so he’s more of a short-area guy rather than being someone who can take the top off the defense. He will also need to spend time learning the nuances of route running, reading coverages, playing the ball, etc. But a common theme in my evaluations is the fact that he played quarterback, so he’s probably one of the more cerebral guys when it comes to football savvy. I wouldn’t expect his learning curve to be too steep, because the coaches have already entrusted the whole offense to him. Things should get easier when he only has to concentrate on learning one spot.

Overall, I like Johnson as a slot receiver and offensive weapon. Grant Perry is a senior, and I thought Kekoa Crawford would play in the slot, but he’s transferring. Michigan will still have Oliver Martin, some walk-ons, and incoming freshman Michael Barrett potentially playing the slot, but there should be an opportunity for Johnson to play fairly early upon arriving on campus. Punt return could also be a spot for him to contribute, and you never know how that spot will play out, since sometimes coaches like to protect their top players by taking them off the field for punt returns.

Michigan now has 16 commits in the class of 2019, and Johnson is the only receiver so far. Johnson would be the first player from Martin County High School to play for Michigan.