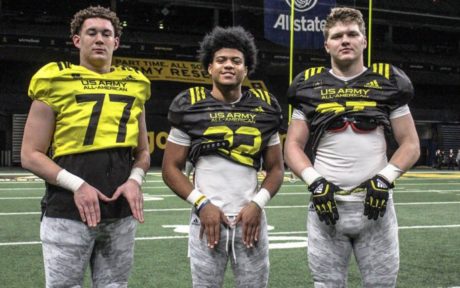 Mayfield was originally committed to Minnesota before getting an offer from the Wolverines, which he accepted. He joins a team with a gaping hole (or two) at offensive tackle, but it’s tough to play on the offensive line as a freshman. Mason Cole, Ben Bredeson, and Cesar Ruiz have played significant minutes in recent years when they were true freshmen, but they’ve gone through struggles. Now the belief is that Michigan will play a couple veteran offensive tackles or a redshirt freshman (James Hudson), so I don’t think Mayfield will play a big role in 2018. He needs to add some bulk and strength, and even new offensive line coach Ed Warinner has hinted that Mayfield will need a year or two of seasoning. He played in a run-heavy high school offense (over 3,500 rushing yards and 50 rushing touchdowns in 2017), so pass protection is probably going to be the biggest adjustment.