May 26, 2010
Uncategorized
no comments
admin 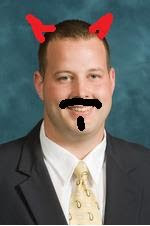 As if the internet and the blogosphere weren’t already awash in news and opinions about Michigan’s proposed sanctions, I will toss my hat into the ring. And let me tell you, my hat smells like a hiker at the conclusion of the Appalachian Trail.

On Tuesday morning, the University of Michigan released its opinion on how it should flagellate itself. Essentially, it boils down to a few key components:

In case you’re wondering about how long 130 hours is, the NCAA limit for “countable hours” is 20 per week. That’s essentially 6.5 weeks of practice spread out over two years, meaning the Wolverines will lose 3.25 weeks of practice each year through 2011. That may not sound like much, but ask any coach – any shortage of practice time is detrimental. Michigan is coming off two horrible seasons (3-9 in 2008, 5-7 in 2009) and still has a young team. They need all the practice time they can get.

The probation thing isn’t a big deal in and of itself. As long as Michigan keeps its nose clean for the next two years, it shouldn’t cause a problem. Unfortunately, due to Ed Martin stuffing $100 bills into Chris Webber’s baggy shorts back in the early ’90s, Michigan could be viewed as a repeat offender. If the University runs afoul of NCAA law again in the near future, it should be expected that Mjǫllnir shall come crashing down upon our heads.

As for quality control people, Alex Herron ruined any chances of ever working his way up the coaching ladder. Not only was he fired because he’s a liar, but he also spent extra time coaching Michigan’s players and they still sucked. Seriously, if you’re going to cheat, at least win at it. The only thing less effective than his extra coaching would be if Rafael Belliard used steroids.

Michigan’s proposal will be heard by the NCAA on August 13, which means Michigan fans have almost another three months to fret.

All of this nonsense sucks. As a Michigan fan, it’s disappointing. Frustrating. The lack of responsibility within the Michigan AD’s office was astounding.

And yet, too many Michigan fans have spent time passing the buck, saying “Everybody else does it, too!” That’s not a valid excuse (although Jonathan Chait disagrees). Not once in my life have I been awarded any kind of slack for that excuse. In fact, I learned at a fairly young age that such an excuse was ridiculous, self-serving, and completely lacking in the acceptance of responsibility. Sure, there are schools that do worse things. According to rumor, USC buys houses for recruits, and in the SEC, recruits get their very own stripper! And if they’re ever fully investigated (as USC is) and found guilty, they should be punished to the full extent of the NCAA’s law.

In the meantime, Michigan and its fans need to take their lumps. This entire investigation came about because of the Detroit Free Press, and they lied their way into luring the NCAA to Ann Arbor. Believe me, I hope the Free Press headquarters gets attacked by a giant alien dog fart.

But ultimately, this is the University of Michigan’s fault. They screwed up. They hired a guy (Alex Herron) with outsized aspirations and let him do his undercover coaching. They failed to interpret/enforce the CARA reporting procedures. The AD office employed a couple guys who couldn’t file reports at their bosses’ requests. Regardless of why the investigation was started, it turned up some damning facts.

So here we are. Michigan’s reputation has been sullied. Non-Michigan fans and national networks are cracking jokes at Michigan’s expense. Potential recruits are hearing the jokes and thinking twice about being interested in becoming a Wolverine. As Michigan fans, there’s nothing we can do except turn the other cheek, explain the situation to outsiders with the patience to listen, and hope that giant alien dog fart targets the Free Press soon.

Brian at MGoBlog proposes medieval punishment for the slackers who let this happen.

Bob Wojnowski at The Good Paper uses words like “measured” and “precise.” Meanwhile, The Bad Paper scrambles for a dictionary.

The Free Press offers their take.

David Brandon joined The Huge Show for an interview.

Adam Rittenberg at ESPN blabs about stuff. What’s got two thumbs and is glad his name isn’t Dave Brandon? This guy!