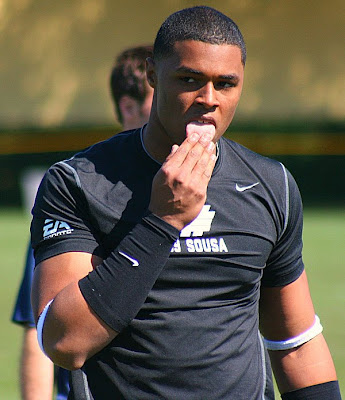 Kevin Sousa, a 6’2″, 213 lb. quarterback from Orlando, FL, committed to the Wolverines on Tuesday. He received an offer just over a week ago and immediately scheduled a trip to Ann Arbor. Sousa has been on the recruitment radar for several months, but the coaches admitted to him that their higher valued targets (Braxton Miller, Christian LeMay, Everett Golson, Kiehl Frazier, etc.) were headed elsewhere and they were expanding their recruitment of the position.

Sousa’s actual size is a bit of a mystery, since he’s listed in various places to be somewhere between the above height/weight and 6’4″, 235. Six-feet-four and 235 lbs. sounds a little big to me, despite the fact that his arms in the above picture look like WIFFLE ball bats. But however tall and broad he stands betweens those ranges, Little Tate Forcier this is not.

Sousa just started playing football as a sophomore, after being a soccer player in his earlier days. Furthermore, Lake Nona High School’s program was in its first year when Sousa was a junior, so there’s plenty of room to improve, both for him and his team. In two seasons as a varsity quarterback, he’s thrown for 2,636 yards and 16 touchdowns while rushing for 1,775 yards and 10 touchdowns. He also missed three games of his sophomore year due to a knee injury, so those numbers are slightly deflated. Also, all accounts point to Sousa being a highly coachable kid who’s ready and willing to learn (video interview here).

Watching Sousa’s highlight film, I see a lot of great things and several things that he’ll need to improve. He’s a great physical specimen with excellent size, good speed, and good vision. He has an above average arm to get the ball downfield. For being new to the sport, he’s got a good head on his shoulders. He keeps his eyes downfield when he’s scrambling and tries to find the open man. When he does tuck the ball and run, he can run around or through defenders. In fact, there are times where he tries to run over smaller kids rather than leaving them in the dust.

Mechanically, he has plenty to improve. He needs to hold the ball higher when dropping back, which will quicken his release. His windup is a little long, especially when scrambling. I also noticed that there were several times where he tried to escape pressure with the ball dangling from his right hand only; if you watched Tate Forcier at the beginning of the 2009 Ohio State game, you know that’s not a good idea. I’d also like to see Sousa hop a little bit less. Most of his snaps seem to come out of the shotgun, and instead of taking steps to drop back, he hops up and down. Not only does it put him in a poor position to throw, but it also affects a quarterback’s vision – the receivers and defenders are suddenly bobbing up and down in his sightline, as if he’s standing on a dinghy. That was a problem in his junior season film (the first video) but seems to have been corrected by the spring game (second), so hopefully that problem has been fixed permanently.

Luckily for Michigan, Sousa should have plenty of time to improve. Tate Forcier, Denard Robinson, and/or Devin Gardner should be able to hold down the fort at quarterback through at least 2013. Sousa can redshirt in 2011 and continue to work on the little things. He’s exactly the kind of quarterback that Michigan should be getting in this class, and realistically, Rodriguez and Co. couldn’t have expected a much better outcome with QB recruiting. There are a few guys out there who are more polished, but not many with better physical talent. However, very few elite prospects would have wanted to come in a year after Devin Gardner and two years after Forcier/Robinson. Sousa is a great addition to the recruiting class.