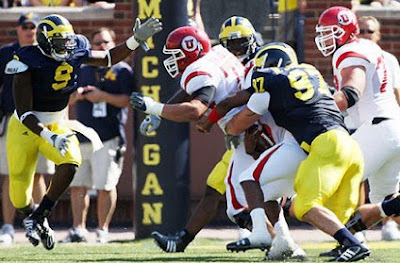 Marell Evans has decided to transfer from Michigan. A former 2-star recruit from Varina High School in Richmond, VA (the same high school as running back Brandon Minor), Evans burned his redshirt as a freshman by playing on special teams. He started last year as Michigan’s starting SAM but quickly lost that position to . . . anyone else willing to play it.

With the arrival of Greg Robinson as defensive coordinator, Evans switched from SAM to the Quick position and appeared to be battling Brandon Herron, Craig Roh, and Steve Watson for the starting job. Most reports had Herron leading in that battle, and it seems that Evans is looking for more playing time. A reporter recently asked Rich Rodriguez if Evans transferred too soon (i.e. before the depth chart was finalized) and Rodriguez basically said, “There is a chance that guys could move up in the depth chart, but most of the backups know they’ll be backups.” In other words, if Evans wanted to play, he’d have to go elsewhere.

This leaves the Quick position three-deep (Herron, Roh, Watson). Herron and Watson are redshirt sophomores who have only played special teams. Roh is a true freshman.

It’s unclear where Evans will end up, but most kids who transfer seem to end up closer to home and at a slightly smaller program.