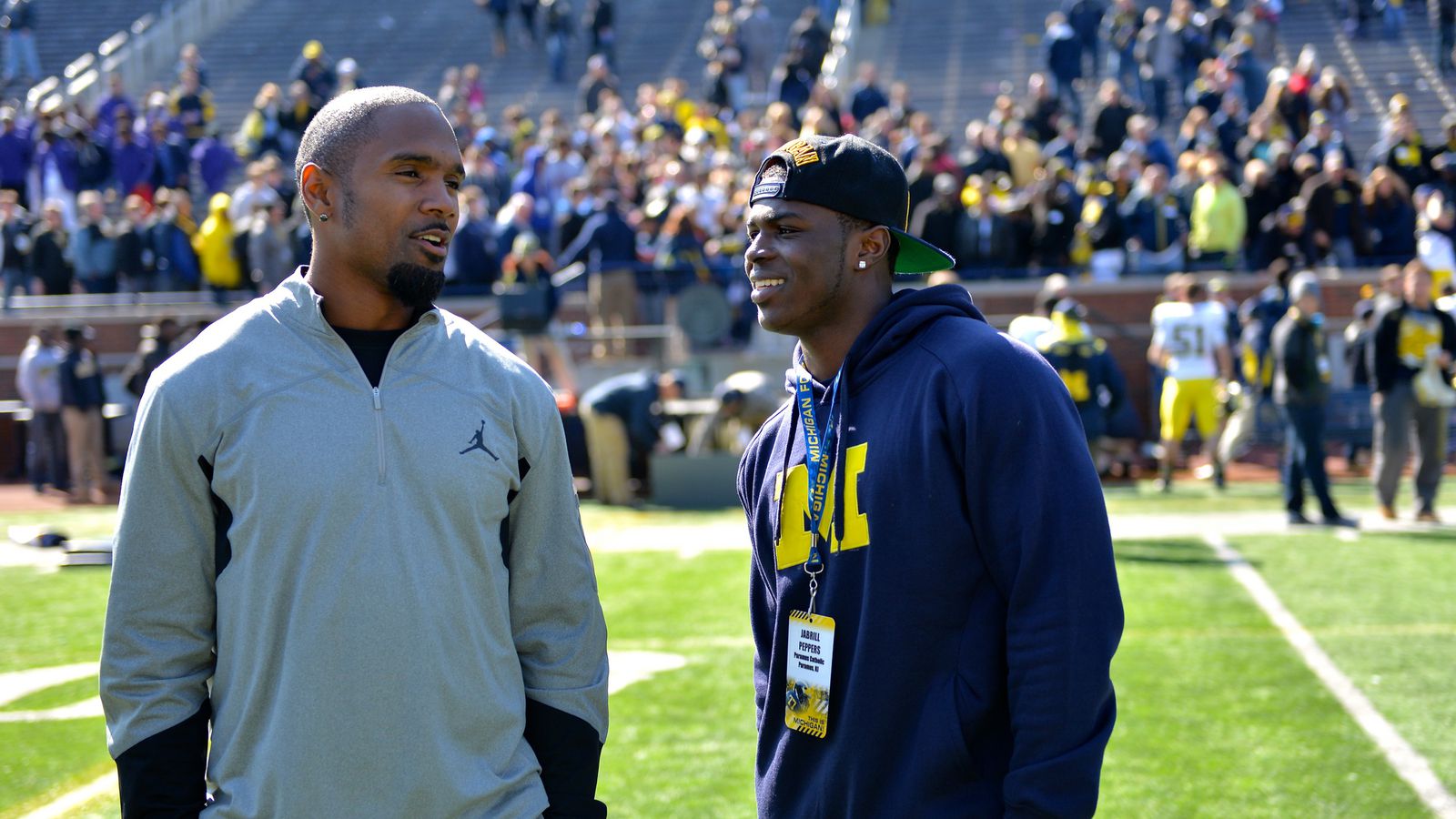 This is an old picture but oh well.

Michigan did what they should have done. Michigan had some occasional issues stopping the run (running backs Robert Martin and Josh Hicks averaged 8.1 and 4.6 yards/carry, respectively), but it didn’t hurt them much because Rutgers wasn’t balanced at all. I was fairly impressed with Martin, who has some quickness, while both backs run tough. Without wide receiver Leonte Carroo, Rutgers had zero threats in the passing game. I mentioned in the game preview that I thought Michigan would struggle to pull away if Carroo played, but that clearly wasn’t an issue.

Jabrill Peppers on offense. On the one hand, I like the way that Michigan is strategically using Peppers on offense. Instead of giving him a series of plays, they are rotating him in and out of the game, showing different formations, etc. Sometimes you see teams give a guy a series or two throughout a game, but I think defenses can key on the guy and get used to him being on the field. With the way Michigan uses him, the defense has to adjust on the fly to a guy who can line up at WR, RB, and QB and be the most dynamic player on the field. It’s a good strategy. On the other hand, I think Michigan will have to unleash Peppers a little more down the stretch if it’s a closer contest. The thing that’s missing at times is the play where Peppers runs exactly what the play looks like it’s going to be – a go route, a toss sweep, etc. He is Michigan’s most dynamic player, but I think he needs to touch the ball in conventional ways, too. He said after the game that he suffered a thigh bruise in practice that hampered him a little bit, so this wasn’t the week to push it. I’m looking at a game like Ohio State as a place where he should probably be in on some standard plays.

Jourdan Lewis has become one of my all-time favorite players. Lewis broke the school record with his 19th pass breakup this season (Leon Hall and Marlin Jackson had 18), but within the last few weeks, I have really come to respect Lewis’s game in a new way. The thing I like most about Lewis – aside from the fact that he’s really good at football – is that he carries himself with dignity on the field. He’s not exactly a Barry Sanders-like quiet leader, but he keeps his head down and brings it on every play. Cornerbacks coach Mike Zordich has talked about how badly Lewis wants to play against the opponent’s best wide receiver, but you can see through his body language that he respects good opponents and good plays. Even in his face-off against Michigan State’s Aaron Burbridge – when Lewis lost his fair share of battles – you could see that Lewis remained confident, didn’t get frustrated, and acknowledged the good plays by Burbridge. Lewis could be an All-American this year, but he doesn’t bring a lot of attention to himself when he makes a play. Even Peppers – who doesn’t cross any unsportsmanlike lines – can be a little flamboyant at times.

The unsportsmanlike call against Butt. In case you didn’t see the play, it was late in the first half when Michigan was deep in its own territory. Michigan sent in a substitution package, so several players on the field jogged to the sideline. When they neared the sideline, Butt – who was in the game on the previous play and already in the huddle – then started jogging toward the sideline before the huddle broke. When he got a couple yards from the sideline, he stopped and lined up on the line of scrimmage. Michigan lined up with what looked like a heavy I-form set to the left, and as soon as the ball was snapped, quarterback Jake Rudock threw to a wide open Jake Butt running down the field, since Rutgers failed to cover him. This drew a 15-yard unsportsmanlike penalty for having the intent to deceive. I think this is a terribly, terribly stupid rule, but I do believe that Michigan was straddling the line on this rule.

I was not aware of this rule until earlier this year, but before a game, officials always ask us if we run any trick plays that they need to watch for so they don’t “screw it up” for us. We had a similar play that we had been working on for two weeks, and the referee “suggested” to us that we should not run the play because it would violate that rule. We didn’t run the play because we didn’t want to incur the penalty, and we scrapped it after that. The truth is that the game of football – and sports in general – are often based on deception. The hidden ball trick in baseball, a double pass in football, a pump fake in basketball, etc. are all ways to deceive the opponent. Even a simple football play like a play-action pass, a reverse, or a screen is deceptive. It’s not the offense’s fault if a defense can’t count to 11 and/or scan the field for potential wide receivers. I would not support the idea of having a wide receiver step off of the sideline one yard onto the field to run a play, but this Jake Butt play should be legal. Regarding the defense, we as a high school team have coaches in the booth keeping track of substitutions, how many men are coming in, how many men are leaving the field, etc., and they communicate that information to the coaches on the sideline. If there’s a way for attentive high school coaches to identify sneaky substitutions, then there is certainly a way for college coaches to do the same.

What is targeting? Nobody knows. You could ask Michigan long snapper Scott Sypniewski, but he might not remember after taking a hit from the crown of the helmet of Najee Clayton (an old high school teammate of Jabrill Peppers). Clayton himself left with an apparent concussion after stupidly lowering his head to hit Sypniewski in the face/head/neck area. The referees initially called a targeting penalty on Clayton, but they rescinded the penalty after review. In case you’re keeping track, Michigan has now had ZERO targeting calls upheld against its opponents, while EVERY targeting call against Michigan has been upheld. I’m not saying there’s a conspiracy against Michigan in the targeting department. What I am saying is that the officials have absolutely no idea how the penalty should be called and enforced. It is by far the least consistent call in college football right now.

Jake Rudock is the man. I gave credit to Wilton Speight last week for coming in and winning the game against Minnesota last week, but we saw once again why Rudock is the starter. Not only did he go 18/25 for 337 yards, 2 touchdowns, and 0 interceptions, but he ran for a touchdown and a two-point conversion. The touchdown was a 4-yarder on which he planted his foot at the 3-yard line and dove for the pylon. Meanwhile during mop-up duty, Speight was 0/1 passing and tripped when coming out from under center, resulting in a 4-yard loss.

I hope Michigan can stay healthy on the defensive line. As strong as Michigan’s defensive line is, it’s an area of concern going forward. Buck linebacker Mario Ojemudia is out for the year with a ruptured Achilles. Nose tackle Bryan Mone is out for the year with a broken leg. Backup Buck linebacker Lawrence Marshall has missed the last couple of games due to an “internal matter.” Willie Henry temporarily left last week’s game with a shoulder injury, and Ryan Glasgow permanently left this week’s game with a shoulder injury. The strongest unit of this team is arguably its defensive line, but two season-long injuries and some other nagging ones could impact the whole squad’s success down the stretch.