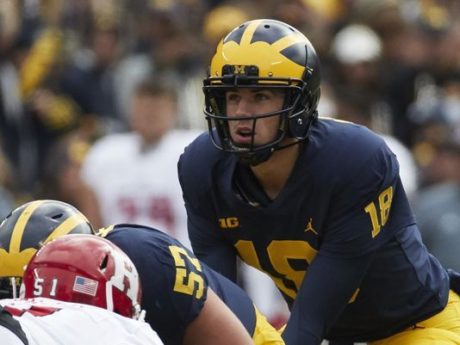 Let’s see more of this guy on offense . . . Brandon Peters. Obviously. He went 10/14 for 124 yards and 1 touchdown. He didn’t take any sacks, and he seemed to be finding the open guys. Perhaps more encouragingly than what we saw with O’Korn against Purdue, Peters mostly wasn’t fitting the ball into tight windows. While O’Korn seemed to be locking onto one guy and getting him the ball no matter what, Peters seems to be going through his progressions a bit more. O’Korn was 3/6 for 13 yards and 1 interception with 2 fumbled snaps prior to leaving the game.

Let’s see less of this guy on offense . . . O’Korn. I like the guy and think he has a good bit of physical talent. He throws a nice ball, and he can move. But for whatever reason(s), his mental makeup isn’t there when the bullets are flying. You can’t be a fifth-year senior and dropping multiple snaps.

Let’s see more of this guy on defense . . . guys from one state playing against their home state teams. Last year it was Jabrill Peppers. This year it was Rashan Gary and Michael Dwumfour (and Kareem Walker on offense) who were standouts. The Garden State products created 6 tackles, 3 tackles for loss, and 2 sacks.

Let’s see less of this guy on defense . . . Wildcat quarterbacks. Saquon Barkley and Janarion Grant have created two huge touchdown runs over the past two weeks. If you’ve got a guy who can play Wildcat QB with Michigan coming up, you probably want to get him ready. Grant had a 65-yard score in this game, and Michigan doesn’t have a true burner at safety who can chase down other teams’ fastest guys.

Play of the game . . . Brandon Peters’s 20-yard touchdown pass to Chris Evans. The pass wasn’t perfect, but the thing that stood out was what it represented. First of all, it was a touchdown, and Michigan needs more of those. Second, it was a passing touchdown, which Michigan only had 4 of going into this weekend. Third, the light finally came on for Michigan’s offensive staff that running back wheel routes can be mismatches against linebackers, something that every staff utilizes against Michigan but the Wolverines never use for themselves. Fourth, it showed that Michigan is realizing that running backs are capable of catching the ball, including Evans (who was a part-time slot receiver in high school) and Isaac (1 catch for 10 yards). And last but not least, it came from the backup QB that many people have been clamoring for over the past year and a half.

MVP of the game . . . Brandon Peters. I don’t think there’s any mistaking that Michigan was just treading water early in the game. A 7-7 game against Rutgers in the second quarter is a wee bit embarrassing. Peters came in and pushed the lead to 28-7 and helped the team finish off a 35-14 victory. He was 10/14 for 124 yards and 1 touchdown, but even before the passing TD, the running game seemed to get an extra boost from his presence, too.