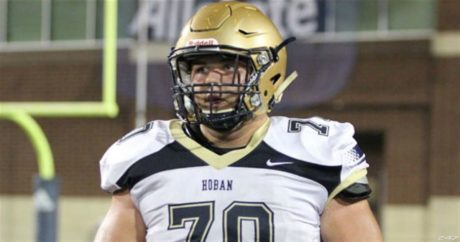 Hit the jump for more on Rumler’s commitment.

Rumler was offered by Michigan’s staff after his freshman year. Growing up a Michigan fan, the Wolverines were out in front since the time they offered. For some reason, I never put in a 247 Sports Crystal Ball on him. I thought I had posted it long ago, but when I checked today, no luck. Oh well. It was a foregone conclusion that he would pick Michigan, and it was not a spontaneous decision to commit at the BBQ at the Big House that’s going on this weekend. (Click HERE for a link to the full visitors list.)

Rumler is a big, nearly fully developed body. In body and face, he looks like he could be 22 years old. He’s very strong, especially in the upper body. He has a good first step and shows good footwork coming out of his stance. He does a good job of working combo blocks up to the second level, and he shows an understanding of how the play develops to keep his body between the defender and the ball carrier. Rumler has heavy hands and can control defenders with his hands once he gets ahold of them. He finishes plays and punishes defenders when possible.

On the negative side, Rumler appears to be a little bit limited athletically, so I disagree with 247 Sports there. He’s probably destined for an interior line position, and he doesn’t have great feet. He has shorter legs than what would be ideal for an offensive tackle, with a longer upper body. That body type reminds me of current Michigan center Patrick Kugler. Rumler relies too heavily on his upper body strength and needs to be careful that he won’t get called for holding. He tends to stand up too high and gets too narrow of a base when run blocking.

Overall, I like Rumler, but I think he might be a little overrated at #142 overall in the 247 Composite. I guess that might correlate to a potential NFL Draft position down the road, but his playing style reminds me of Kyle Kalis, who obviously struggled during his five years in Ann Arbor. Kalis was serviceable, but he didn’t get drafted and was the type of player who peaked very early and then plateaued.

Michigan now has two commitments in the 2019 class, as Rumler joins linebacker Charles Thomas. The class is expected to reach at least 15 players (LINK).

TTB Rating: I won’t hand out a TTB Rating until the 2018 class finishes out, but tentatively I’d place him in the low 80s for now.