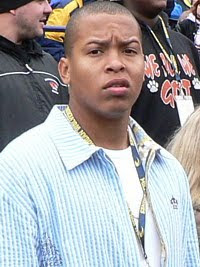 Alex Smith expresses the sentiment of the day.

My thoughts on this game are incomplete. When Carlos Brown fumbled with about five minutes left in the third quarter, I headed out. Brandon Graham had just blocked a punt in Penn State’s territory, and even though I knew Michigan probably wouldn’t win (it was already 32-10), I thought Michigan might at least make it respectable.

Instead, I went to a charity cash party and gambled away money. Unfortunately, I was surrounded by Penn State fans.

Yesterday was an offensive abomination. I had issues with the playcalling and substitutions. Previously dependable players weren’t dependable. Starting center David Molk returned only to get injured and force somewhat incompetent backup center David Moosman into action as the snapper. Penalties. Poor quarterback reads. Fumbles. Interceptions. It seems like every team has an absolutely horrible game once per year, and hopefully this is Michigan’s final one this year.

Everyone and his mother knew the game was over when Michigan produced perhaps the worst offensive series of the year. Starting deep in Michigan’s own territory, the Wolverines ran the ball on first down and Mark Ortmann got called for holding. The ball was on Michigan’s 4-yard-line. Then Ortmann false started on (er, prior to) the next snap. Prior threw an incomplete pass on second down. Then Tate Forcier took a delay of game penalty, putting the ball on the 1. On third down, while Forcier was calling an audible and stepped to the side, David Moosman inexplicably snapped the ball out of the back of the end zone. Safety. The end.

Even though Michigan gave up 396 yards to Penn State, I really didn’t think Michigan played horribly on that side of the ball. For the most part, I thought the players did pretty well. Just like on offense, Michigan was outsmarted.

PSU was able to isolate subpar defensive players in pass coverage. Starting middle linebacker Obi Ezeh was twice exposed, once against running back Evan Royster and once against tight end Andrew Quarless. But he had no business being one-on-one with Royster, who was lined up all the way on the sideline. And in a Tampa Two scheme (in which the two safeties play halves while the MIKE covers the deep middle), both Jordan Kovacs and Mike Williams failed to react to Quarless running straight up the middle of the field; meanwhile, backup Quick Brandon Herron failed to chuck Quarless coming off the line of scrimmage.

Michigan’s cornerbacks also did a poor job of covering the wide receivers early in the game. They seemed to be trying to protect Michigan’s young, inexperienced safeties and bailing out a little too quickly. This left PSU’s receivers wide open on outs and hitches.

I’m depressing myself, so let’s finish up.

Offensive game ball goes to…uhhh…Brandon Minor? I don’t know. He led the team in rushing, scored a TD, and didn’t fumble. Sure. Let’s give it to him.

Defensive game ball goes to…Brandon Graham. He had 7 tackles, 3.5 tackles for loss, and half a sack. I wouldn’t even want to shake hands with that guy, as I would probably incur the most pain I’ve ever felt. Remember in the movie Speed how there were those big barrels of water on the highway to prevent stray cars from running into concrete barriers? Opposing quarterbacks would be wise to make their pads out of big barrels of water.

Let’s see less of this guy on offense…Denard Robinson. He’s not being used effectively, and that’s on Rodriguez. I hate to say it, but I really haven’t seen a single reason to believe that this guy should remain at quarterback for the remainder of his Michigan career. He’s a turnover waiting to happen, especially on passing downs. Disregarding the Delaware State game, six of Robinson’s 13 drives this year have ended in a turnover. Yesterday he was 0-for-2 with an interception and a fumble. He doesn’t make good reads in the passing or running game. And absent the threat of the pass, Robinson’s running abilities are becoming less and less effective. Rodriguez should use Robinson on occasional plays in the middle of drives or on two-QB plays at random times, but what’s happening right now isn’t working. So it needs to be changed.

Let’s see less of this guy on defense…Obi Ezeh. I’m not saying he should lose his job, but he’s not a three-down linebacker. I’d like to see defensive coordinator Greg Robinson start to mix in some 4-2-5 nickel packages. I like Michigan’s four-man front with Roh in there. On obvious passing downs, Coach Robinson should remove Ezeh in favor of a third cornerback. I think Boubacar Cissoko would be a good slot corner, so the back seven would consist of linebackers Mouton and Steve Brown; corners Donovan Warren, Troy Woolfolk, and Cissoko; and safeties Kovacs and Williams.