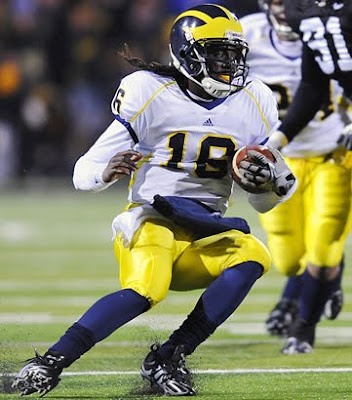 As I was watching the game yesterday, this thought wandered into my head for the first time. Does Michigan have a starting quarterback for the future? After the first series against Penn State, on which Tate Forcier looked pretty good, everything went downhill.

Tate Forcier
Tate Forcier seems to be the quarterback of the future. He has started every game this year and leads the team in passing. So far he has thrown for 1,167 yards, 9 TDs, and 5 INTs while completing 55.3% of his passes. And in Rich Rodriguez’s read option offense, Forcier has 75 carries for 190 yards.

Forcier seems to have regressed this year. Either that or teams have figured out his weaknesses and are exploiting them. Early in the year, Forcier was picking apart man coverages, and it seems more teams are running confusing zone defenses to slow down Forcier’s read progression. On designed rollouts, opposing defensive ends and linebackers are taking better angles and hemming Forcier inside the pocket; while Michigan’s running backs are doing a good job as personal protectors, Forcier can’t get outside and run or find good throwing lanes like he did early in the year.

Forcier’s game management has also been somewhat lacking. He’s fumbled several snaps, albeit mostly ones from backup center David Moosman. Yesterday he clocked the ball on third down at the end of the first half when he had time to run a quick play and take a shot at the end zone. And before that play, he fell on a fumble and was very slow getting up off the ground. And in a hurry-up offense like Michigan’s, there’s no reason to take a delay of game penalty like Michigan did near its own goal line.

Denard Robinson
Denard Robinson is most Michigan fans’ second option. I have maintained since they were recruited that Forcier was the better of the two, but many fans claimed that Robinson would be a Pat White clone. And while that may end up being true, I guess – although I don’t think it will – Pat White redshirted as a freshman, so judging Robinson right now might be jumping the gun.

That being said, Denard Robinson sucks at playing quarterback right now. He’s not ready and I’ve said that all along. Subtracting the game against Delaware State from his stats (because, honestly, they shouldn’t count), Robinson’s passer efficiency rating is 37.11. Overall, he’s 10/21 for 172 yards, 2 TDs, and 4 INTs. He’s carried the ball 51 times for 293 yards.

Robinson doesn’t make good reads in the passing game. He doesn’t make good reads on the read option. He fumbles the ball too frequently as a runner. He’s inaccurate on deep balls. He throws the ball too hard on short throws. And other defenses know it, which means they load up against the run whenever he enters the game. So what would be 20- or 30-yard runs for a guy who’s also a passing threat have turned into 4- or 5-yard gains for Robinson.

Nick Sheridan
Sheridan is the dark horse in all this. He’s not fast and he doesn’t have a strong arm. He’s a former walk-on. He’s a redshirt junior and he might not be around next year.

However, Sheridan does know the offense. He’s not fast enough to be a real threat as a runner, but he’s fast enough to gain three or four yards if a defensive end crashes on the read option. His accuracy on short throws seems to have improved. We haven’t really seen him throw deep this year, but reports suggest that his arm is a bit stronger than it was.

His performance this year has been limited to a couple snaps against Western Michigan and nine passes against Delaware State, so that’s inconclusive. But for a team that’s struggling, Sheridan is an option to be considered.

VERDICT:
Tate Forcier should continue to start. His skills are better suited for this offense than anyone else’s. He has the most talent and the best arm. Right now, though, he’s not being used effectively. Rodriguez needs to lean on the running game, run some play action out of the I-formation, get the ball to Martavious Odoms on short throws, and keep Forcier out of harm’s way a little more. The strength of this team is its running backs; throwing the ball 32 times and running Forcier 14 times is putting too much pressure on Forcier.

Denard Robinson should get fewer snaps at quarterback. He should get occasional plays behind center and Rodriguez needs to find more creative ways to get him the ball. The coaches should start putting in packages where Robinson runs plays out of the slot or at running back; he may be a future quarterback, but that time isn’t now. You either have to remove him completely or put him in a position to succeed. You can’t keep throwing him out there in situations where he has proven he will fail (i.e. passing the ball on obvious throwing downs).

If Rodriguez decides to rest Forcier’s shoulder or if Forcier gets hurt more seriously, Sheridan should get the majority of the snaps. I know this probably isn’t a popular statement, but he’s a better quarterback right now than Robinson. He’s not going to win games by himself, but he can check into the right plays, handle the ball properly, and make the necessary reads. This team doesn’t need to throw the ball down the field to be successful, and that’s probably Sheridan’s biggest weakness.

Meanwhile, class of 2010 commitment Devin Gardner should be licking his chops. There have been rumors that he’s considering other schools (Florida, for example), but from everything I’ve heard, those rumors are untrue. On top of that, Forcier hasn’t fully convinced me that he’s ready to be the future quarterback, and Robinson hasn’t convinced me that he should even be playing quarterback. Unless Forcier’s consistency improves over the next five weeks or so, I’d expect Gardner to come in with a decent shot at earning some playing time next year.