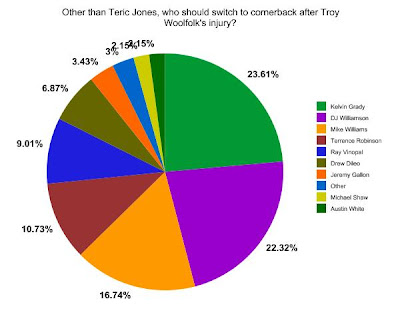 For the past several days, there has been a poll running on the sidebar regarding any potential position changes. Rich Rodriguez was asked by the media whether any offensive players would be moved to defense to play cornerback, and he said no. So far the only player who has changed responsibilities is Teric Jones, who played corner last season but was playing Bandit in the spring.

I’m curious to know who people had in mind when they voted for the “Other” category. Feel free to comment if you were one of those people and voice your opinion.

In the immediate future, I guess Michigan fans shouldn’t expect any further position changes. But another injury or departure could force a switch.