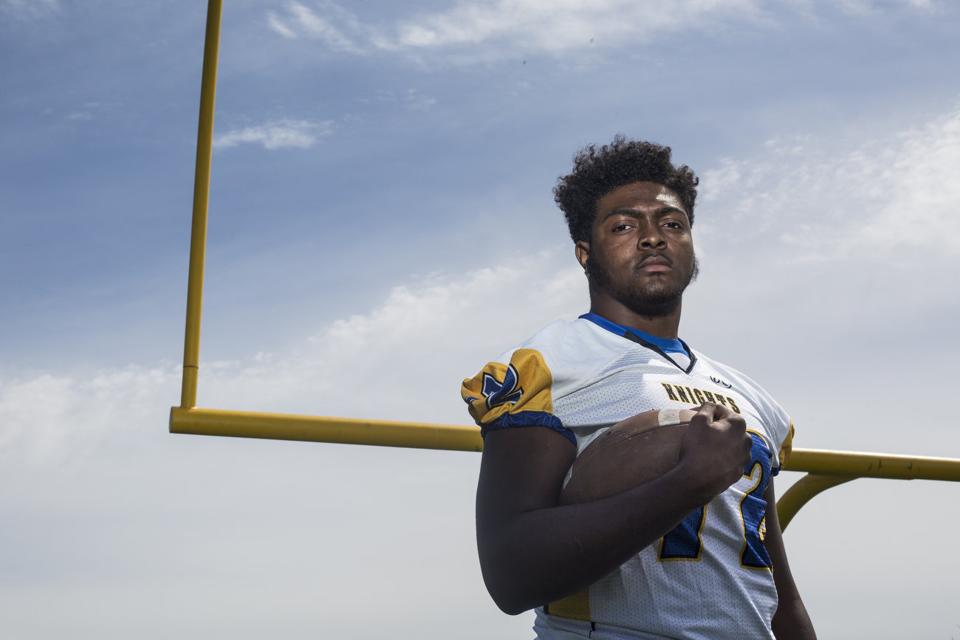 11. Deron Irving-Bey – DE – Flint (MI) Southwestern
Height: 6’5″
Weight: 271 lbs.
Notable offers: Michigan, Michigan State, Tennessee
Commitment: Uncommitted
247 Composite: N/A
Analysis: Irving-Bey is a big body who nonetheless does a good job of staying low and firing off the ball. He doesn’t do a great job of using his hands, but that’s something that can be learned. Meanwhile, he’s physical and changes direction fairly well to track down ball carriers in the backfield. He may grow into a defensive tackle at the next level.

12. Cody White – WR – Walled Lake (MI) Western
Height: 6’3″
Weight: 190 lbs.
Notable offers: Iowa, Michigan State, Minnesota, Wisconsin
Commitment: Michigan State
247 Composite: 3-star, #70 WR, #496 overall, #14 in-state
Analysis: White is a tall, solidly built receiver who does a nice job of adjusting to the ball in the air, high-pointing passes, and outmuscling defensive backs for position. He’s a physical receiver who won’t run away from many people, but he changes direction well for a taller guy and can fight through some tackles. As a junior in 2015, he made 49 catches for 927 yards and 8 TDs.

13. Jairus Grissom – QB – River Rouge (MI) River Rouge
Height: 6’2″
Weight: 204 lbs.
Notable offers: Houston, North Carolina State, Purdue, Rutgers, Syracuse
Commitment: Uncommitted
247 Composite: 3-star, #22 dual-threat QB, #957 overall, #22 in-state
Analysis: Grissom, who is transferring from Dearborn Heights (MI) Robichaud to River Rouge for his senior year, is a compact dual-threat guy with a lot of upside. He’s not the fastest guy and doesn’t have the strongest arm, but he does enough of everything well to make him a dangerous QB. He needs to work on his mechanics a little bit and keep the ball up higher, but he has a nice, over-the-top delivery and throws guys open. He won’t break many 80-yarders, but he has enough speed to make defenses pay and he runs hard. He would be a nice fit for what teams like Houston and Rutgers plan to run.

14. Scott Nelson – S – Detroit (MI) U of D Jesuit
Height: 6’2″
Weight: 184 lbs.
Notable offers: Iowa, Michigan, Michigan State, Penn State, Wisconsin
Commitment: Uncommitted
247 Composite: 3-star, #46 S, #606 overall, #16 in-state
Analysis: Nelson won’t amaze you with his speed, hitting ability, or athleticism, but he has a good frame and very good anticipation. He plays some quarterback and some wide receiver for his high school team, but his best position going forward seems to be as a free safety.

15. Bryce Wolma – TE – Saline (MI) Saline
Height: 6’4″
Weight: 235 lbs.
Notable offers: Arizona, Northwestern, Tennessee, West Virginia
Commitment: Arizona
247 Composite: 3-star, #33 TE, #781 overall, #20 in-state
Analysis: Wolma may not have the bulk and strength to be a traditional, in-line tight end, but he has that H-back skill set. He can be used going in motion, moving out into the slot, or occasionally on the line of scrimmage. He offers some value as a guy who can run after the catch, and he has a smooth running style that should make him a tough cover for linebackers.