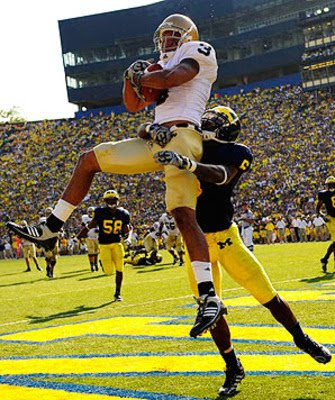 Rush Offense vs. Notre Dame Rush Defense
Denard Robinson showed last week that he can be an elite runner from the quarterback position. He ran for 197 yards on 29 carries against UConn. Meanwhile, Michigan’s actual running backs combined to average 3.4 yards per carry against the Huskies. The Fighting Irish should be geared to stop Robinson from running the ball. That means the Notre Dame contain men should stay home and force Robinson to hand off the ball in the zone read option. If I’m the defensive coordinator, I’m going to try to make Michigan’s unproven running backs beat me. This is a base 3-4 defense, and the blocking schemes will be different than against UConn. Michigan’s athletic offensive line should be able to get up on the linebackers, though, and provide some running lanes for Robinson and the backs. Notre Dame defensive end Ethan Johnson will be tough to handle for the offensive tackles, but this defense sets up well for David Molk, Steve Schilling, and Patrick Omameh to have a field day.
Advantage: Michigan

Pass Offense vs. Notre Dame Pass Defense
Denard Robinson was 19/22 for 186 yards and 1 touchdown. That level of success will be difficult for Robinson to emulate this week against a veteran secondary that should be able to disguise coverages. Michigan’s passing game was pretty vanilla against UConn, and last year’s leading receiver, Roy Roundtree, might miss the game due to injury. Combine that with Notre Dame’s veteran outside linebackers who should be able to rush the passer, and I expect many pass plays to turn into running plays for Robinson. Obviously Michigan will continue its dependence on the short passing game with slants, hitches, outs, flares, and bubble screens, but this week we should see Robinson coming back to Earth from his 86% completion rate last game. Despite safety Jamoris Slaughter likely missing the game, the other three starters in the defensive backfield are all seniors.
Advantage: Notre Dame

Rush Defense vs. Notre Dame Rush Offense
Armando Allen and Cierre Wood combined for 151 yards on 25 carries (6.0 yard average) against Purdue. For all the talk about Brian Kelly’s passing game, Notre Dame has a ton of talent at running back and Kelly won’t be shy about using that talent. Meanwhile, Michigan’s interior rush defense needs to improve. Michigan allowed 138 rushing yards against UConn, including running back Jordan Todman’s 105 yards on 20 carries (5.3 yard average). It would be unwise for the Irish not to attack the middle of the defense with the run. Nose tackle Mike Martin and linebackers Craig Roh and Jonas Mouton need to play at the top of their games in order for Michigan to have success against the ground game. But even with all those guys – and Brandon Graham – playing in 2009, Allen rushed for 139 yards on a 6.6-yard average against Michigan.
Advantage: Notre Dame

Pass Defense vs Notre Dame Pass Offense
This could be the bane of Michigan’s existence. Sophomore quarterback Dayne Crist completed 76% of his passes last week, and he has a solid group of receivers to catch those passes. Wide receiver Michael Floyd and tight end Kyle Rudolph are both excellent athletes, and Michigan might not have the horses to run – and jump – with them. Michael Floyd had an excellent game against the Wolverines in 2009, and that was prior to the departures of, oh, about 13 cornerbacks. Furthermore, Michigan produced zero sacks last week against UConn. The one saving grace may be that Saturday’s weather in South Bend, IN, is supposed to be wet. For Michigan’s sake, hopefully that leaves Michael Floyd, Rudolph, and Co. dropping as many passes as UConn quarterback Zach Frazer’s targets last week.
Advantage: Notre Dame

Final Predictions- Armando Allen rushes for 125+ yards.- Denard Robinson comes back to Earth and completes less than 60% of his passes.- Michigan’s pass rush sacks Crist at least 3 times.- For the second week in a row, Michigan allows a 40+ yard reception.