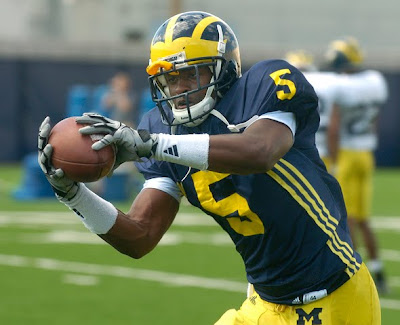 Vlad Emilien, a sophomore free safety from Lauderhill, FL, has decided to transfer. He asked for and was granted a release from the University of Michigan on Tuesday.

Emilien was a highly sought after recruit in the Class of 2009, at least until he tore his ACL prior to his senior year of high school. Several schools backed off their pursuit of him due to the injury, but Michigan honored the scholarship offer. He enrolled in January 2009 and participated in spring drills, but being only 8 months removed from surgery, he wasn’t up to full speed. Emilien played sparingly as a true freshman, despite a complete lack of depth at the safety positions. Redshirt sophomore Mike Williams and redshirt freshman walk-on Jordan Kovacs both saw frequent playing time instead of Emilien, who played only on special teams last season.

This past spring Emilien suffered a less serious knee injury, but battled through it to play in Michigan’s spring game. However, he was beaten by slow-ish receiver Roy Roundtree for a 97-yard touchdown pass; in the chase to run down Roundtree, the receiver actually pulled away from Emilien, who was passed by then cornerback Teric Jones. If Emilien had speed to begin with, it had not returned by April 2010.

This fall Emilien was passed on the depth chart by redshirt freshman, former receiver Cameron Gordon. Walk-on Jared Van Slyke moved up to the #2 spot at free safety, while Emilien filled out the three-deep. Prior to the opener against UConn, Van Slyke suffered a season-ending injury in practice (some sources have called it a broken collarbone, some said a knee injury). Emilien presumably moved up to #2 on the depth chart at free safety, but apparently that wasn’t good enough for him. He played a bit during the 30-10 victory over the Huskies in week 1, but three days later, he had asked for a transfer.

This is the second departure of a Class of 2009 defensive back within a month (Justin Turner being the other). Michigan signed 22 players in that class, and the only three departures have come from the already thin defensive back crew (Turner, Emilien, and the non-qualifier Adrian Witty). Furthermore, this comes on the heels of a season-ending injury to cornerback Troy Woolfolk, a temporary injury to safety/linebacker Carvin Johnson, the early departure of cornerback Donovan Warren, the downward spiral of criminal mastermind Boubacar Cissoko, and the odyssey of non-qualifier Demar Dorsey.

MGoBlog coined the term Angry Michigan Safety Hating God a few years ago, referring to the poor play and retention of safeties. That term can now be applied to the entire defensive backfield. Since fall practices began, Michigan has lost its #1 and #3 cornerback (Woolfolk, Turner), its #1 Spur (Johnson), and its #2 and #3 free safeties (Van Slyke, Emilien). True freshman Ray Vinopal has reportedly replaced Van Slyke/Emilien at #2 on the depth chart at free safety, which is terrifying. Other options at the position include sophomore Brandin Hawthorne (a guy who has bounced back and forth from linebacker to safety, but who has no business seeing the field at free safety) and freshman Marvin Robinson, who is currently Jordan Kovacs’ backup at Bandit.

On a grander scale, this bodes unwell for Michigan’s program. The Wolverines were already hovering near the APR failure line prior to this season, and the two transfers since then have only worsened matters. Emilien seems to have left Michigan on good terms, so it doesn’t affect Michigan or Coach Rich Rodriguez from a public relations standpoint. However, Rodriguez needs to start getting solid contributions from his recruits, especially in the defensive backfield. Whatever needs to be done, he needs to convince these kids that it’s not the worst thing in the world to wait around for three or four years to get an opportunity to play. Current starting cornerback James Rogers played two positions in three years, and was going to ride out his senior season as a backup cornerback; now due to the unfortunate turn of events for starter Woolfolk, Rogers has a job that’s his to lose.

Meanwhile, the 2011 recruiting class just went from a projected size of 17 up to 18. The Wolverines can now afford to fit one more defensive back in the class, perhaps Georgia safety Avery Walls.

As for Emilien’s future, Tom Van Haaren reports that he’s considering UCLA, Duke, Virginia, Boston College, and Oregon. He has now been added to the Ex-Wolverine Encyclopedia.