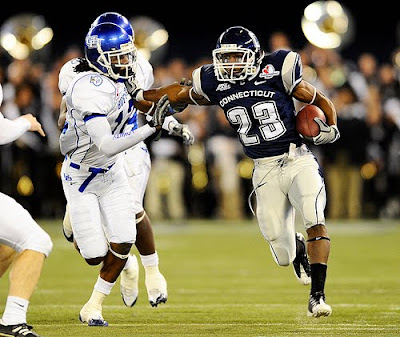 Rush Offense vs. UConn Rush Defense
When Rich Rodriguez was in the Big East, his teams ran all over UConn. Rodriguez knows how to run against a Randy Edsall-coached team, and that should serve him well. Not only will Michigan start the fleet-footed Denard Robinson, but the Wolverines have a solid offensive line and a variety of capable running backs. The Huskies do boast two very good senior linebackers in Lawrence Wilson and Greg Lloyd, but Lloyd is coming off a serious knee injury and probably won’t be up to 100%. Meanwhile, UConn’s defensive line is banged up. This should be a big day for Michigan on the ground.
Advantage: Michigan

Pass Offense vs. UConn Pass Defense
I don’t expect Michigan to go to the air as much as last year, not with Denard Robinson at the helm. Robinson’s passing ability has reportedly improved in the last year, but it had nowhere to go but up. Additionally, Michigan should be able to churn out yards on the ground, which makes the pass merely a distraction. We’ll surely see some short passes on play action, and I think Roy Roundtree and Darryl Stonum will both be targeted deep once or twice. That should keep the defense honest, and at least one big play should occur through the air. However, all bets are off when Forcier enters the game. He had an excellent game in the opener against Western Michigan in 2009, and he’s healthy right now. Michigan should be able to take advantage of a weak secondary without too many turnovers, although I’m guessing they’ll pick off a bad decision or two.
Advantage: Michigan

Rush Defense vs. UConn Rush Offense
Things begin to get iffy for Michigan on defense. UConn has run the ball well in the recent past, and junior Jordan Todman had 14 touchdowns and over 1,000 yards in 2009. Four of UConn’s starting offensive linemen return, and that doesn’t bode well for a Michigan front that includes a converted fullback starting at middle linebacker (Mark Moundros) and a freshman outside linebacker (Carvin Johnson). Michigan’s defensive line should be stout against UConn’s power run game, but the linebackers will probably make some frustrating mistakes. The defensive backfield is young and I have questions about the tackling ability of all four guys on the back end, excluding Jordan Kovacs – who is slow but a good tackler.
Advantage: Connecticut

Pass Defense vs. UConn Pass Offense
Zach Frazer originally committed to Notre Dame, but he couldn’t hack it there. He transferred to Connecticut, and maybe he can’t hack it there, either. If every UConn opponent’s defense is like Michigan’s, though, he’ll have a very solid season. The defensive backfield is very green and – yeah, I’ll say it – not very talented. Michigan has certainly suffered from bad luck regarding injuries and personality problems at those positions, but the coaching and recruiting have to be questioned, too. Regardless, the Wolverines will be playing two former receivers (James Rogers, Cameron Gordon), a former walk-on (Jordan Kovacs), and a guy who should probably be playing safety (J.T. Floyd). Ugh. There will be missed tackles and blown assignments. Tomorrow will be frustrating.
Advantage: Connecticut

Denard Robinson will rush for 80+ yards.

One Michigan running back will run for 100+ yards.

Despite the “change” in terminology, Michigan’s defense will look much the same as in 2009.