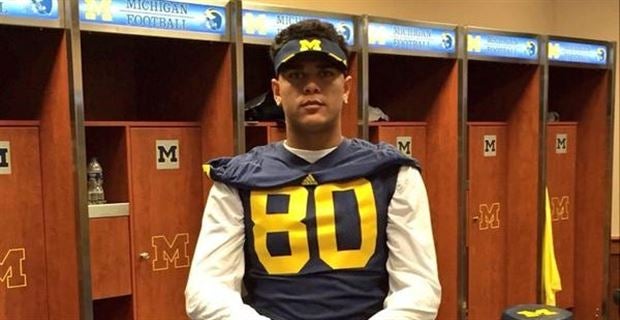 Cooper City (FL) Cooper City defensive end Rashad Weaver decommitted from Michigan on Monday. He had been committed to the Wolverines since June after being offered during one of Michigan’s satellite camps in Florida. Here’s his post on Twitter, which I think sounds appropriately bitter:

As you can see if you like, I was not high on Weaver when he committed (LINK). I gave him a TTB Rating of 45, which is/was the lowest of Michigan’s 2016 recruiting cycle. Then Weaver went out, and no doubt through hard work, made me eat some of my words. I thought he took some tremendous steps forward as a senior, and I was no longer regretting Michigan’s decision to offer him a scholarship. (Certain recruiting insiders were saying that Michigan viewed him as a top-5 defensive end in the class when they initially offered.)

This is not a common stance for me. If you have seen my reactions to the decommitments of Erik Swenson, Sir Patrick Scott, Kiante Enis, etc., I have not been overly sentimental. I don’t believe those recruits were championship-level players. But with Weaver, I think he’s got something. He said in his Twitter post that Michigan had not been in much contact for several months, but I don’t think it’s a coincidence that he is not the first commit to come out and say that he’s no longer wanted by Michigan. My guess is that the Wolverines were holding off on cutting ties with Weaver, viewing him as someone who was on the chopping block but one of the last cuts (or perhaps the last cut) they would be willing to make.

You never know what goes on behind the scenes, so I hate to speculate without knowing a timeline of events, exactly what the player was told, exactly where he fell short of the staff’s expectations, etc. However, this is yet another public relations blow for Michigan.

As I’ve said before, winning cures everything. If Michigan wins the College Football Playoff next year or even makes it into the top four, people will forget about these “blips on the radar.” But in the meantime, why is Michigan scheduling satellite camps for this coming summer? Clearly, the purpose was to make connections and bring out under-the-radar recruits. That happened. But now those recruits are getting axed from the recruiting class, and many of those bridges are being burned. I’m not sure I understand yet another round of satellite camps if the only guys who are going to be allowed into the class are big-time recruits who don’t bother with satellite camps, anyway.

As for Michigan’s on-field situation, the team is down to 24 commitments. Weaver would have been a defensive end or defensive tackle, and Michigan still could use help at those positions. Rashan Gary and Connor Murphy are the two most likely to step in. The class is expected to reach somewhere between 28-30 prospects.

Wherever he ends up, I hope he finds success.