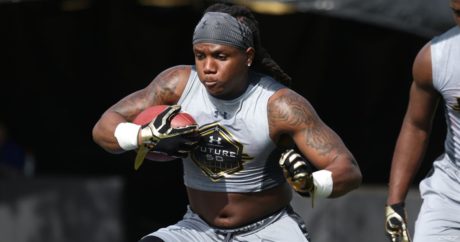 Cream of the 2017 Crop: Is it possible that anyone’s better than wide receiver/cornerback Fofie Bazzie? I think not. It’s not often this can be said, but it’s hard to determine which player is the crown jewel of Maryland’s class because there are so many good options. The highest ranked player is Hyattsville (MD) DeMatha’s Anthony McFarland, Jr., a running back who missed most of his senior year with a leg injury. He’s the #100 overall player in the class and has some big-play ability. The Terps also landed Oxon Hill (MD) Potomac cornerback Deon Jones (#175 overall), Bridgeton (NJ) Bridgeton safety Markquese Bell (#191 overall), and Washington (DC) St. John’s quarterback Kasim Hill (#240 overall), all skill guys who could be difference-makers at the next level. In addition, Maryland has really struggled in the trenches in recent years, but they signed DeMatha offensive guard Marcus Minor (#225 overall) and Owings Mills (MD) McDonough offensive tackle Jordan McNair (#285 overall). Hill is a guy who looked pretty good, especially as a runner, in the Under Armour All-American Game:

Cream of the 2018 Crop: That aforementioned lone commit is Durell Nchami from Burtonsville (MD) Paint Branch. He’s a 3-star, the #57 weakside end, and #1130 overall. At 6’3″ and 210 lbs., he’s not huge and could be that Buck linebacker/defensive end hybrid that D.J. Durkin used when he was Michigan’s defensive coordinator.