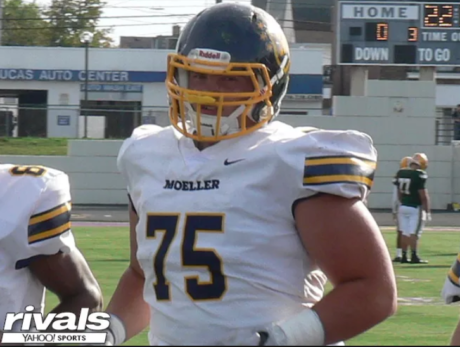 Austin (TX) Bowie wide receiver Elijah Higgins was offered by Michigan. With offers from Auburn, Notre Dame, Ohio State, Stanford, Texas, and Texas A&M, among others. he’s a 4-star, the #44 wide receiver, and #303 overall. As a junior in 2017, he caught 26 passes for 425 yards and 6 touchdowns.

Baltimore (MD) St. Frances defensive tackle Jeffrey M’ba was offered by Michigan. The 6’6″, 285-pounder moved from France to Maryland recently, and he will play his senior year at St. Frances, the school coached by former Michigan staffer Biff Poggi. So far I do not believe M’ba has been rated by the recruiting sites.

Roebuck (SC) Dorman wide receiver Jacoby Pinckney was offered by Michigan. He’s a 6’2″, 205 lb. prospect with offers from Florida, Georgia, South Carolina, and Virginia Tech, among others. He’s a 3-star, the #57 wide receiver, and #436 overall. Last year he caught 65 passes for 1,075 yards and 9 touchdowns.

Tampa (FL) Jefferson wide receiver Ahmarean Brown committed to Maryland. As the #565 player overall, he now becomes the highest ranked Terrapins commit in the 2019 class, topping two guys who are . . . unranked so far.

Orange (NJ) Orange cornerback Nyquee Hawkins committed to Virginia Tech. When he was first offered, it was thought that Michigan’s pursuit of New Jersey prospects might pay off with a commitment from Hawkins, but that fervor for Garden State prospects has curtailed over the last year or so.

Miami (FL) South Dade wide receiver Frank Ladson, Jr. committed to Clemson. Michigan just offered him about a week prior to his commitment, so there was no chance for the Wolverines to make much of an impact in that time period. Of course, it’s odd that Michigan waited that long to offer a 5-star the #14 overall player.

Clinton Township (MI) Chippewa Valley linebacker Marcel Lewis committed to Michigan State. The 6’1″, 205-pounder is the first player in this class to pick the Spartans while holding a Michigan offer.

St. Charles (IL) North cornerback Tyler Nubin committed to Minnesota. He was offered by Michigan in February and visited in mid-March, but instead he becomes Minnesota’s highest ranked recruit (#469 overall).

Bridgeport (CT) Avon Old Farms quarterback Taisun Phommachanh committed to Clemson. He had (has?) a visit scheduled for Michigan for this upcoming weekend, but it’s tough to deny Clemson at this point when they come calling. The commitment of Cade McNamara seemed to indicate that Michigan would not land Phommachanh, which I thought to be unlikely already.

Here’s a list of visitors from last weekend (LINK).

Paw Paw (MI) Paw Paw offensive guard Karsen Barnhart will be announcing his decision on Friday, April 20. As of Wednesday evening, 92% of the Crystal Ball picks are for Michigan.

Metuchen (NJ) St. Joseph offensive tackle John Olmstead named a top 5 that includes Michigan (LINK), and he will be announcing on Friday, April 20.