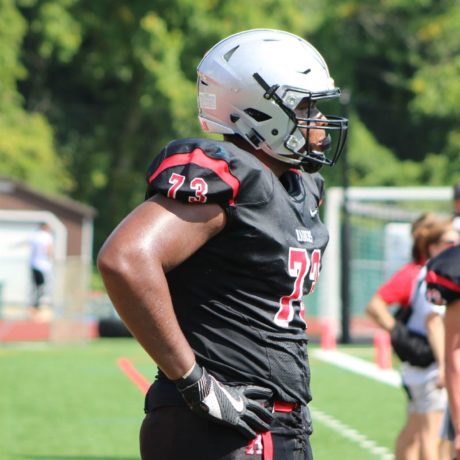 Houston (TX) St. Pius X quarterback Grant Gunnell decommitted from Texas A&M. At 6’6″ and 212 lbs., he’s a 4-star, the #2 pro-style guy, and #53 overall. Oklahoma State is in sole possession of the lead when it comes to Crystal Ball picks with 40% of them right now. Michigan offered him last year, but he has not shown much interest in the Wolverines.

Reno (NV) Damonte Ranch quarterback Cade McNamara decommitted from Notre Dame. He’s a 6’1″, 187-pounder with offers from Alabama, Georgia, Tennessee, and USC, among others. He’s a 4-star, the #8 pro-style quarterback, and #269 overall. Over the past two seasons, he has thrown for over 7,000 yards, 90 touchdowns, and 19 interceptions.

Hit the jump for more bits and pieces on the 2019 class.

Princeton (NJ) Hun School offensive guard Caedan Wallace was offered by Michigan. At 6’5″ and 315 lbs., he has offers from Auburn, Clemson, Florida, Florida State, LSU, Oklahoma, and Oregon, among others. He’s a 4-star, the #6 offensive guard, and #125 overall.

Rice grad transfer offensive tackle Calvin Anderson announced on Saturday that he would be transferring to Texas. This was expected, but it still sucks. Michigan’s best left tackle is Grant Newsome, who is still highly questionable to return to football after his knee injury. It will be very interesting to see who emerges to take the place of Mason Cole.

Dallas (TX) Bishop Dunne cornerback Marquez Beason committed to Illinois. This is a huge pull for the Illini, who generally struggle to recruit elite players. Beason is a 4-star, the #6 athlete, and #54 overall. Florida, Florida State, Georgia, LSU, Notre Dame, Ohio State, Oklahoma, and numerous other schools also offered Beason. I have a feeling this commitment won’t last, but anything is possible.

Here’s a list of visitors from this past week/weekend (LINK).

Safety Lewis Cine is headed from Massachusetts to Texas for his senior year. He was a teammate of Sainristil (see above), but now he will play at Cedar Hill (TX) Trinity Christian. This could be a good thing, because all ten of his Crystal Ball predictions are for Penn State. However, Michigan was also near the top of his list, and Don Brown has some pull in the Northeast.