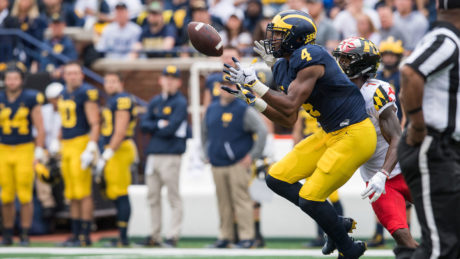 ALL-BIG TEN FIRST TEAM
Prediction: Shea Patterson, Zach Gentry, Ben Bredeson, Rashan Gary, Devin Bush, Lavert Hill
Actual: Karan Higdon, Jon Runyan, Chase Winovich, Rashan Gary, Lavert Hill, David Long, Will Hart
Thoughts: Runyan and Hart were total surprises for All-Big Ten honors. Runyan was expected to be a starter, but a lot of people thought he would struggle. Meanwhile, Hart struggled in 2017 and he appeared to be a backup option to Brad Robbins until Robbins’s injury caused him to miss the whole season. On the flip side, Shea Patterson had a good season (3rd Team All-Big Ten) but was overshadowed by Dwayne Haskins, and Zach Gentry was good (#2 in YPC among conference tight ends, #4 in yardage) but not good enough.

ALL-AMERICAN
Prediction: None
Actual: Devin Bush, Jr.
Thoughts: Bush is an excellent player, but I didn’t think he would put up the stats to be an All-American. His stats were solid (79 tackles, 9 tackles for loss, 5 sacks, 6 pass breakups, 2 QB hurries), but he was an All-American for the way he played the game. (Side note: The leading tackler in the country was Washington linebacker Ben Burr-Kirven, who had 176 tackles!)

BREAKOUT OFFENSIVE PLAYER
Prediction: Nico Collins/Ben Mason
Actual: Nico Collins/Jon Runyan, Jr.
Thoughts: Collins took a giant leap from last year, going from 3 catches for 27 yards to 38 catches for 632 yards and 6 touchdowns. He became a deep ball and jump ball threat, and Shea Patterson loved throwing to him. Meanwhile, Runyan went from being a backup to being a First Team All-Big Ten player at left tackle, a spot that very few people thought him capable of playing. Mason had his moments, but he was used less frequently than many expected.

BREAKOUT DEFENSIVE PLAYER
Prediction: Joshua Uche
Actual: Uche
Thoughts: Uche played a small number of snaps throughout the season. He made only 15 tackles, but over 50% of them (8) were for loss, and almost 50% of them (7) were sacks. That gives him some momentum going into next season to be a big-time contributor, so it will be interesting to see if he can hold up as a weakside end or heavy usage player at some position or another.

MOST DISAPPOINTING OFFENSIVE PLAYER
Prediction: Shea Patterson
Actual: Sean McKeon
Thoughts: McKeon’s production dropped significantly from 2017 to 2018, going from 31 catches to 14, from 301 yards to 122, and from 3 touchdowns to 1. He was Michigan’s second-leading receiver in 2017, admittedly a down year for pass catchers in Ann Arbor. He had several drops this season and generally did not seem like he made any improvements from his second to third year on campus.

MOST DISAPPOINTING DEFENSIVE PLAYER
Prediction: Michael Dwumfour
Actual: Dwumfour
Thoughts: Dwumfour, dubbed a mini-Maurice Hurst, Jr. going into the year, showed flashes of good play but was largely ineffective. He finished the year with 21 tackles, 4 tackles for loss, and 3 sacks. Those numbers aren’t terrible, but considering the fact that in his final five games, he totaled just 3 tackles, 0 tackles for loss, and 0 sacks, it doesn’t show a ton of progress going into 2019.