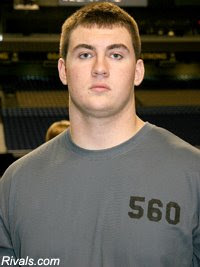 Skyler Schofner’s name has been bandied about as someone who might commit soon, perhaps at Michigan’s spring game. Offensive linemen might seem boring, but games are won in the trenches. You don’t see championship teams with poor line play, so I’m spreading the wealth. Here’s what I’ve gathered about Schofner.
Height: 6’7″
Weight: 276 lbs.
Position: Offensive tackle
Jersey number: #70
School: Monroe High School in Johnstown, OH
40 Yard Dash: 5.0 seconds (reported)
Bench max: 340 lbs.
Notes: Holds offers from Akron, Illinois, Indiana, Kentucky, Maryland, Michigan, NC State, Ohio, Toledo, Vanderbilt, and Wisconsin, among others . . . Plays OT, DT, and DE . . . Transferred from Washington Court House High School to Johnstown Monroe in January 2009 . . . Named Second Team All-State in Ohio in 2008
Scouting report: Good waist and knee bend in stance . . . Comes off the ball well without wasted steps . . . Initiates excellent blow with first-level defenders . . . Has good athleticism and moves well for someone so tall . . . Has agility to play left tackle . . . Lacks motivation or desire to finish blocks . . . Often stops blocking after initial contact . . . Must improve hand punch on second-level defenders, as they are often too agile for his efforts . . . Too often blocks with a high pad level, using his chest to block rather than his shoulders or hands . . . Will get outmuscled by shorter or technically sound defensive linemen . . . Too often watches his skill players run downfield alone rather than run with them and continue to block . . . Will need to add at least 20 lbs. of lean muscle to be effective
Projection: Despite nearly identical size, Schofner should not be confused with 2009 commit Taylor Lewan. Both have similar athleticism, but Schofner lacks the intensity of Lewan. Still, the lack of intensity could be due to his lack of feeling challenged. Schofner has the athleticism to play left tackle and the run blocking ability to play right tackle. He would definitely require a redshirt year and probably wouldn’t be a viable BCS-level player until his redshirt sophomore year, but he could develop into a solid Big Ten starter by his junior or senior year.