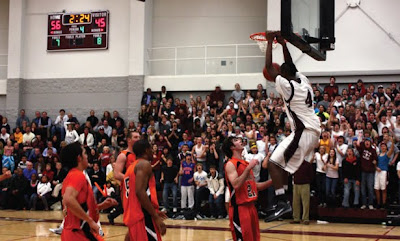 Wide receiver Shawn Conway, from Seaholm High School in Birmingham, MI, committed to the Wolverines on Saturday. He visited for Michigan’s Junior Day without any offers, but left the event as a commit. The internets are angry. To the internets I say . . . shush.

Conway was definitely under the radar. Michigan discovered him at the 7-on-7 camp in Ann Arbor last summer. He had sat out his sophomore year after transferring from Cass Tech in Detroit, and during his junior year, had as a quarterback the kid you see in the video below. (I don’t want to bag on a sophomore quarterback who was supposed to be a backup going into the year, but not many sophomores are great quarterbacks, so it’s nothing about which to be ashamed.) Rich Rodriguez definitely was not cowed by the internet reactions to commits from kids like DJ Williamson, Antonio Kinard, Ray Vinopal, and Carvin Johnson last year. Williamson and Kinard didn’t have any other FBS offers at the time of their commitments, either. Fans were angry. If you didn’t believe it before, believe it now – Rodriguez doesn’t care about message boards.

As for Conway’s talents, make no mistake – he has significant physical skills. According to an interview with TomVH from MGoBlog, Conway claims to be 6’4″, have run a 4.49 forty, and have a 38″ vertical jump. While I always assume that measurables are fudged a bit by players and recruiting services, I would not be surprised if he’s actually 6’3″ with a 37″ vertical and a forty in the 4.6 range. This kid is the real deal.

I am not inclined to question Rodriguez’s decision to offer Conway. The highlight video below shows a kid who made highlight-reel catch after highlight-reel catch despite the fact that he only had 11 total receptions in 2009, according to a poster on MGoBlog (EDIT: Rivals reports that Conway had 76 catches for nearly 900 yards and 10 touchdowns, plus another 500 yards on punt and kick returns). His speed has been questioned, but he’s close to 6’4″. How many 6’4″ receivers have truly elite speed? He’s fast enough to threaten defensive backs, and his height and leaping ability make him a deep threat, regardless of his speed. Furthermore, some of his highlights are against teams like Farmington Hills Harrison (Drew Stanton, Agim Shabaj) and Detroit Country Day (Jonas Gray, Kenny Demens), schools that possess significant athletic talent.

I have also seen suggestions that Conway will become a cornerback or tight end. I am quite confident that neither will happen. First of all, he looks too stiff to play cornerback, and even if he’s not quite 6’4″, he’s probably too tall – there aren’t many guys like Lenny Walls out there. Second, he’s too slight to play tight end; he would have to bulk up way too much. This guy is a receiver.

In a way, Conway reminds me of Marquise Walker. Walker was unlike Conway in that he was a highly touted recruit (although, for all we know, Conway could blow up in the recruiting world), but he was tall, had great hands, and wasn’t blazingly fast. I see some of these same qualities in Michigan’s newest commit. I also think that any Michigan fans who criticize Conway’s offer but look favorably on Jeremy Jackson should rethink their positions. Jackson has good size and hands as well, but he’s slower than Conway. Conway has 4-star talent but probably won’t be a 4-star to the recruiting services unless his quarterback talent improves.