September 7, 2011
Uncategorized
14 comments
admin
I’m not sure if you Michigan fans (or Western Michigan fans, if any Broncos have stumbled upon this site) remember this play from Saturday’s 34-10 victory, but it’s the one that went a long way toward earning linebacker Brandon Herron the Walter Camp Defensive Player of the Week honors.  It was also the longest interception return in Michigan football history at 94 yards.  It was kind of a big deal.
To set up the play, WMU has driven down to the Michigan 4.5 yard line with the score tied 7-7 and just over seven minutes remaining in the first half.  It’s 2nd-and-goal.  The Broncos come out with an Ace package (two tight ends, two wide receivers, one running back).  Despite the proximity to the goal line, defensive coordinator Greg Mattison knows that the Broncos like to throw the ball and counters with his basic nickel package: an Okie front with three down linemen, three linebackers, two cornerbacks, and three safeties.
SAM linebacker Jake Ryan has bumped down inside over WMU’s right guard.  On one side of him is Mike Martin in a 0-tech (nose tackle) and on the other is Craig Roh in a 5-tech (outside shoulder of offensive tackle).  Herron is aligned in a 3-off (outside the left guard’s shoulder and off the ball). 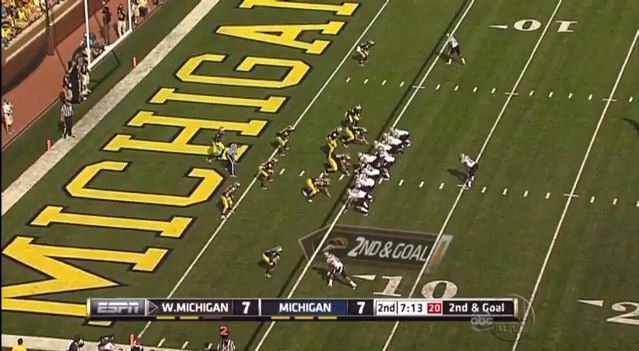 As WMU quarterback Alex Carder hits the first step of a three-step drop, he sees that Michigan is running the exact same coverage that he probably saw in his pre-snap read – Man Free.  Each of the cornerbacks is locked up on a wideout, strong safety Jordan Kovacs and nickel corner Thomas Gordon each have a tight end, and free safety Carvin Johnson patrols the middle of the field; Herron is tasked with picking up the running back out of the backfield, and middle linebacker Kenny Demens is coming up to blitz.  With the left tight end releasing and the right tight end staying in to block, WMU’s offensive line correctly slides its protection to the left; therefore, each offensive lineman is responsible for the gap immediately to his left.  In theory this should work, unless the defense sends multiple defenders to one gap.  They don’t. 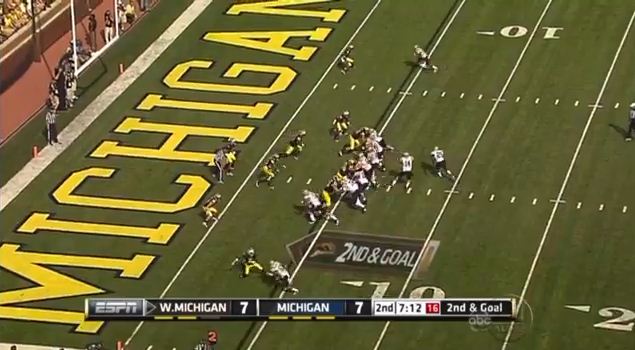 As Carder hits his third step, his options are limited.  Cornerback Courtney Avery has blanketed the receiver to the bottom of the screen while the releasing tight end is running straight into the juggernaut known as Jordan Kovacs.  At the top of the screen, cornerback J.T. Floyd awaits the backside receiver.  Nickel corner Thomas Gordon waits at the line of scrimmage for the running back to release, which the RB never does; instead he steps up to block the 250 lb. Demens.  The LT successfully single blocks DE Ryan Van Bergen, the LG and C struggle to hold off NT Mike Martin, and the remaining TE single blocks DE Craig Roh.

The problem is that everybody forgot about Jake Ryan, who rushed at the snap.  The RG blocked him initially, but when Ryan stepped back to the RG’s other side, the RG correctly left him to RT Dann O’Neill.  O’Neill has nobody else to block and stands still so everyone can admire his long blonde hair.  Carder just hit his back foot and might want to release the ball soon, since a 230 lb. man is two yards away and approaching fast. 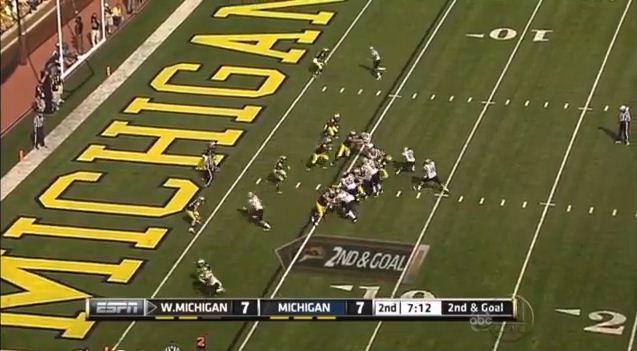 As Carder releases the ball, Ryan does his best impression of Dikembe Mutombo and swats the pass, which looks to be intended as a back shoulder throw to CB Avery’s wideout.  The pass is probably a bad idea no matter what, since nobody’s open except FS Johnson and LB Herron.  In retrospect, Carder’s thinking he should have eaten it and taken the sack.  At the time, Carder was probably thinking, “Maybe if I throw it, the bad man won’t hit me anymore.”  He was wrong. 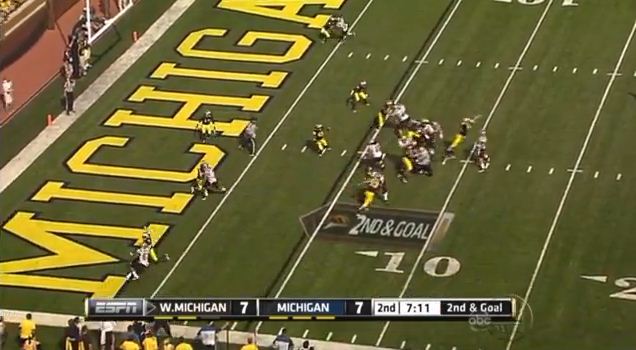 Herron intercepts the deflected ball at the 5-yard line while Carder lies on his back. 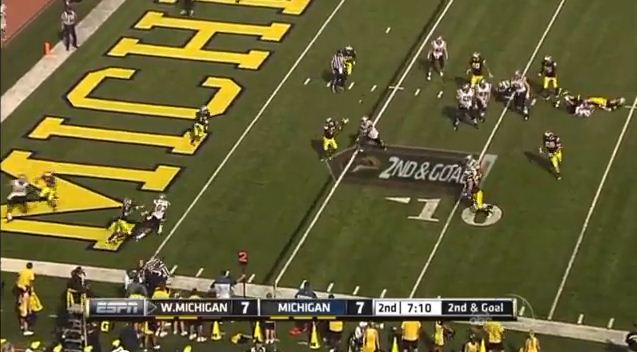 Herron, who was planning to step out of bounds and enjoy raucous cheers and pats on the butt from the cheerleaders, hears a screeching voice coming from the vicinity of my couch yelling “Stay inbounds!”  Spurred on by the urgency of my screams, he eludes the WMU left tackle and runs as fast as he can. 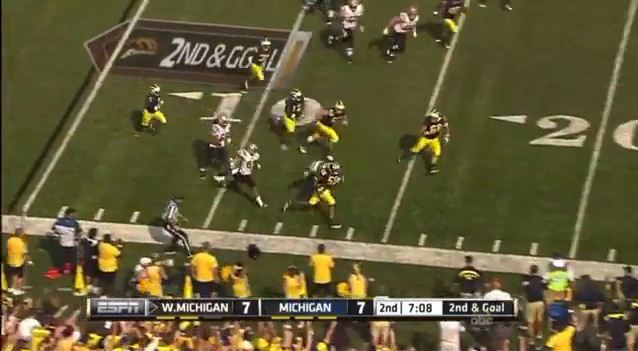 O’Neill, who at this point feels monumentally guilty for leaving Michigan and for growing hair like Kyle Turley’s, pretends to trip over Kenny Demens’ foot so he won’t have to run anymore.  Meanwhile, Herron’s convoy includes the 300 lb. Mike Martin and the 290 lb. Ryan Van Bergen, neither of whom are needed but both of whom make the effort anyway; the 230 lb. Ryan, who batted the pass to Herron and the quarterback to the ground, also runs interference downfield.  (Watch this full speed and take a gander at Van Bergen, who puts his head down and sprints his ass off despite knowing that he’s a brontosaurus chasing . . . some other type of faster -saurus.) 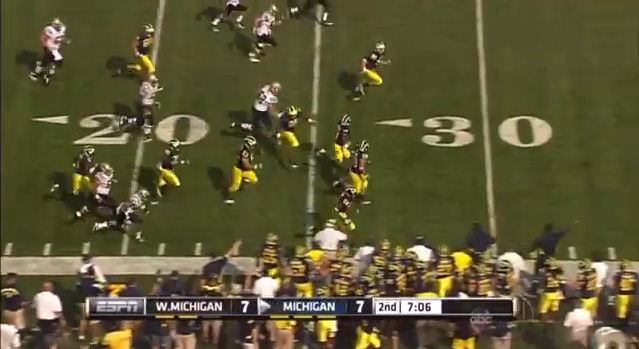 Herron caught the ball at 7:09 and crossed the goal line at 6:58, meaning he took roughly 11 seconds to travel 95 yards wearing football pads and dodging offensive linemen.  Remember all those practice reports saying that Herron was a physical freak but lacking in football instincts?  This confirms the former, but the latter might be in question now.  Combine this play with his 29-yard fumble return for a touchdown later in the game, and Herron had 8 tackles, 1 interception, 1 fumble recovery, 123 yards of returns, and 2 touchdowns.  Not bad for a guy who was a late addition to the starting lineup after beginning the week as the #2 weakside linebacker.  I wonder if Herron will start next week . . .