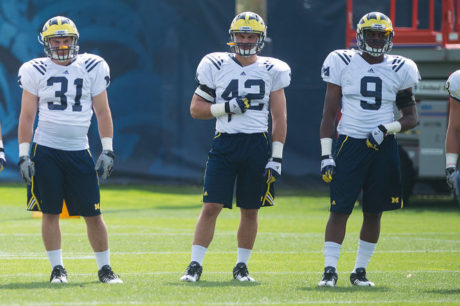 Projected LB starters: SAM Jabrill Peppers (RS So.), MIKE Ben Gedeon (Sr.), WILL Mike McCray II (RS Jr.). It’s sad to say that this might be the last time we have a chance to see Jabrill Peppers in a Michigan uniform. A defensive back prospect coming out of high school, Don Brown seems to want him to play outside linebacker like Steve Brown did back in 2009. Gedeon is the only true, experienced linebacker returning from last year; he started one game last season and has 70 tackles, 5.5 TFLs, and 2 sacks in his career. McCray is more of a question mark. Listed at 6’4″ and 242 lbs. last year, he missed the whole season with a shoulder injury. In three years on campus – including a freshman season when he was injured and took a redshirt – he has 2 tackles and 1 blocked punt to his name. However, when the team took the field on Monday morning, he was reportedly the first WILL linebacker on the field.

Hit the jump for more on the linebacker position.

Departures: Michigan lost three senior linebackers in the forms of Joe Bolden, Desmond Morgan, and James Ross III. Bolden and Ross were both highly ranked recruits, but neither one lived up to his potential. Morgan was a bit under-the-radar as a prospect but was the most consistent of the three. Those three manned the linebacker spots last season, but it was the weakest unit on the defense.

Backup battle: I don’t expect Peppers to be the full-time SAM, and redshirt sophomore Noah Furbush is going to get a chance to play the spot when the Wolverines need a little more bulk. He made some plays on special teams late last season but is very inexperienced on the defensive side of the ball. True freshman Carlo Kemp is listed at 6’3″, 250 lbs. and will reportedly get a look at both SAM and MIKE. Head coach Jim Harbaugh said recently that redshirt freshman Reuben Jones would get a shot to play some inside linebacker, though he came in as a defensive end. I think freshman Devin Bush, Jr. will have a chance to start this fall, but he might be playing from behind spring because of his physical development. Redshirt sophomore Jared Wangler does not appear to be pushing for major playing time at this point. One other note is that redshirt sophomore Chase Winovich is listed as a defensive end, but he may get a chance to play SAM as well.

#1 thing to watch: Similar to the defensive line position, it will be interesting to watch what the front looks like this season. Will it be a 4-3 Under or a 4-3 Over or a 3-4 of some sort? Michigan has depth on the defensive line and a bunch of unknown quantities at linebacker. Good coaches adapt to their personnel, and I believe that Don Brown is a good coach. The staff needs to find its best 3-5 players at linebacker and develop a front and blitz packages that fit those players’ skill sets.