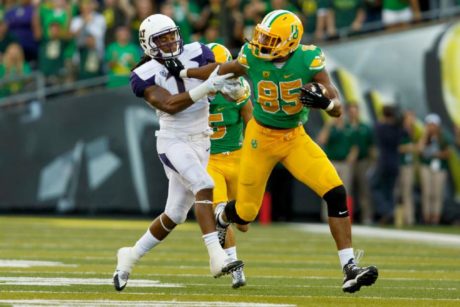 END_OF_DOCUMENT_TOKEN_TO_BE_REPLACED

Statistical Analysis of 2012 Recruiting: By State 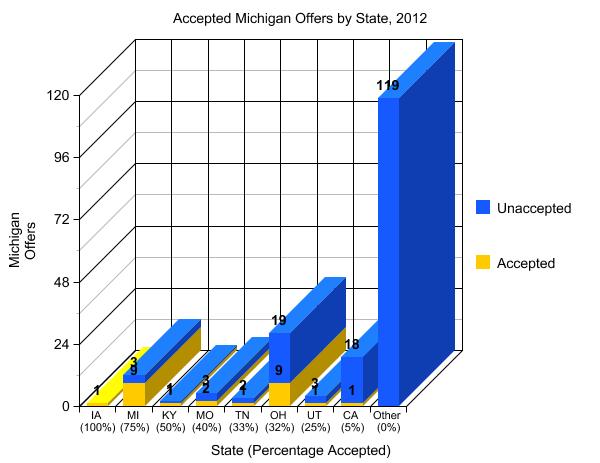 This is a little bit later than I normally post this series, but better late than never.  Using the 2012 Offer Board, I put together the above graph of Michigan offers from the 2012 class.  For a comparison to past years, you can look here.  Michigan sent out 193 recorded offers in 2012, which was essentially on par with the 195 offers in 2011 and 192 offers in 2010.
You can see that Iowa was a good place to recruit for Michigan’s coaches in 2012, mainly because Amara Darboh was the only guy they recruited from the state.
Otherwise, the states of Michigan and Ohio were very productive, with 75% and 32% success rates, respectively.  Much like in the state of Iowa, the coaching staff cherry-picked a few recruits from Kentucky (Jeremy Clark), Missouri (Jehu Chesson, Ondre Pipkins), Tennessee (Blake Bars), and Utah (Sione Houma).  The fertile recruiting grounds of California produced only one Michigan commit in the form of Erik Magnuson.
States included in the “Other” category, which produced zero commits, are:

The five states where Michigan threw out double-digit offers in 2012 were Ohio (28), Texas (22), California (19), Michigan (12), and Georgia (11).  Michigan and Ohio were obviously roaring successes, but the other three states combined for one commitment (Magnuson) out of 52 offers. 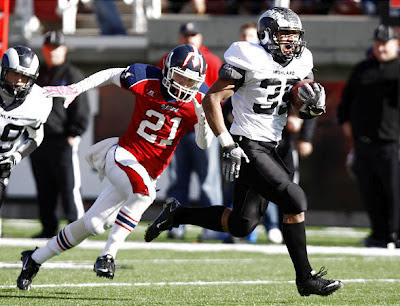 Sione Houma is the first scholarship athlete to be recruited to Michigan as a fullback since Vince Helmuth in 2007. But unlike Helmuth – an eventual 290-pound bruiser who moved to defensive tackle before transferring – it’s likely that Sione will be fulfilling a more versatile role in Michigan’s offense. Houma’s commitment post describes him as a well-rounded player with “a little bit of this and a little bit of that.” Sione agrees, saying, “I think I’m pretty much even at everything; I don’t have one top [skill] – maybe going 100% every play.” Although Sione admits to being a man of few words, he was nice enough to answer several reader questions last Saturday while watching his older brother’s rugby game.
Utah to Michigan: “My friends are all excited for me to go to a big-name college and play football. . . . My family is happy that I am going out of state so I can be independent and learn new things on my own. . . . [I decided to come to Michigan] for the education, first of all. It’s one of the top colleges in the U.S., and I’ll have more opportunities and more choices to major from.”
Playing fullback: “Fullbacks are protecting the running backs when they have the ball. Just go around the linemen – let them do their work. One thing I love about fullback is going after everyone else, showing that I’m not scared of anyone.”
Increase in level of competition: “I’m not really worried about it. I’m just going to play my normal game. Everybody [at the next level] is going to be the best. But I’m trying to top that and do what I can do to do my best. . . . I look up to [defensive lineman] Haloti Ngata for the Ravens. I’m a big time fan. He always plays to the best of his ability, gives 100% on every play.”
Ethnicity, heritage: “Tonga, it’s in the Pacific Islands. I was born and raised in Utah; my parents were born and raised back in the islands. They sacrificed a lot to move over here for me and my siblings to have a better life, to have more opportunities to choose from.”
Height and weight: “I weigh 220 [pounds] right now; I’m 6’0”. I’m trying to weigh up to 230 or 240, somewhere around there. They [the coaches] said they want me at like 230. They gave me a workout book for last month and this month, I think. It’s a challenge to me so I can work harder and get bigger and get to where I want to be.”
Redshirting: “We’ll see when the time comes. I don’t know what I want to do yet.”
Senior year injury: “I had a high ankle sprain. I had to sit out a couple games. But at the end of it, it was good because I was healthy when I came back. . . . I’m fully recovered.”
Jammin’: “I like chilling with my family and friends, and I love to jam. [I play] the Ukulele, but I haven’t played in a while.”
Uncategorized 22 comments admin

This is a fun yearly exercise for me.  You can take a look back at the 2009, 2010, and 2011 recruiting awards for a historical perspective on my choices.  Overall, I haven’t done a bad job, with some hits and misses over the years.  My best defensive recruit from 2010 was Marvin Robinson, who has yet to make much of an impact.  But I’ve picked a couple good ones as guys who are most underrated – Desmond Morgan and Jake Ryan.  It’s the usual – sometimes you’re right, and sometimes you’re wrong.

Best Overall Recruit: OG/OT Kyle Kalis
This was a pretty tough choice between Kalis and James Ross, but I’m going to go with Kalis, in part because of his NFL potential and his size.  Whereas Ross needs to add a little bit of bulk and even then might not be big enough for many NFL teams, Kalis has the size, technique, athleticism, and pedigree to play at the next level.


Best Offensive Recruit: OG/OT Kyle Kalis
The 2012 class isn’t deep with offensive stars, so this wasn’t a very difficult choice.  But I think Kyle Kalis is about as college-ready as high school linemen come.  He has excellent technique and very good size (6’5″, 305 lbs.).  He could be on the two-deep this fall, and I’m guessing he’ll be at least a three-year starter for the Wolverines.

Best Defensive Recruit: LB James Ross
The best NFL prospect of the bunch might be defensive tackle Ondre Pipkins, but for their three-to-five years in college, I’ll take Ross as the best defensive player.  He could challenge Desmond Morgan for playing time as a true freshman, and by year two, he might have the starting WILL job locked down.

Recruit Most Likely to Make an Early Impact: DT Ondre Pipkins
I don’t think it’s a good thing when freshmen enter school knowing that the coaches almost have to play them, but that’s the situation Pipkins will find himself in this fall.  With Michigan’s top two defensive tackles having left and only unproven guys remaining, he’s a virtual lock to see significant time this fall.

Fastest Recruit: RB/PR/KR Dennis Norfleet
Running back Drake Johnson and wide receiver Jehu Chesson are high school track stars, but I’m giving Norfleet the nod due to his short-area quickness, too.  It takes Johnson and Chesson a little bit longer to accelerate than it does Norfleet.

Strongest Recruit: DT Ondre Pipkins
Pipkins will have no excuse for failing to be the strongest player on Michigan’s team in a few years.  He’s 6’3″ and 330 lbs. already.

Best Under-the-Radar Recruit: DT Willie Henry
The more I think about the defensive line coaches at Michigan getting their hands on Henry, the more excited I get.  Henry is a very athletic kid for his size and should be a penetrating-type defensive tackle for Michigan in the years to come.  Outside of classmate Ondre Pipkins, he might very well be the best DT recruit since Mike Martin in 2008.

Most Overrated Recruit: OT Blake Bars
Bars has the unfortunate luck of coming to Michigan in the midst of two great offensive line recruiting hauls.  He could very well get lost in the shuffle with guys like Kalis, Erik Magnuson, Logan Tuley-Tillman, Kyle Bosch, etc.

Most Likely to Redshirt: OT Blake Bars
As an offensive lineman, you’re likely to redshirt, anyway.  But Bars has some weight and strength to add before he sees the field, and he’s the least likely to play early, in my opinion.  Kalis already has the size and technique, Ben Braden is reportedly 325 lbs., and I think Erik Magnuson is a little more advanced (although I expect him to redshirt, too).

Personal Favorite Recruit: LB James Ross
For the second year in a row, I’m picking a weakside linebacker.  Last year it was Antonio Poole.  This year it’s Ross.  I love these fast, downhill players who can make plays in the backfield, in pass coverage, and at the line of scrimmage.  Ross is one of the most technically sound football players I’ve seen since I started following recruiting, and that makes him incredibly fun for me to watch.