Redshirt junior defensive end Ron Johnson, Jr. has entered the transfer portal and will not return to Michigan.

Johnson was a member of the 2016 recruiting class and signed with the Wolverines out of Camden (NJ) Camden, along with wide receiver/safety Brad Hawkins (who then took a prep year). He was a Semper Fidelis All-American and I gave Johnson a TTB Rating of 83 (LINK).

However, Johnson has been languishing somewhere in the 70s of the last few season countdowns, and there just hasn’t been much progress. He bulked up to play some 3-technique defensive tackle at one point, but he transitioned back to defensive end without a noticeable move upward on the depth chart at either spot. He played one game as a true freshman and did not see the field in either 2017 or 2018. He was not expected to play a significant role in 2019, so this loss opens up a scholarship for a transfer or a walk-on.

Michigan now has just 83 scholarship players slated to be on the roster in 2019 (LINK). Not counting Hawkins (who signed again in 2017), Michigan is down to just 14 out of 28 players who signed with the Wolverines in that 2016 class.

Rising redshirt junior quarterback Brandon Peters intends to transfer out of Michigan and has entered the transfer portal.

Rising redshirt freshman cornerback Myles Sims has entered the transfer portal, which likely means he will not be returning to the Wolverines. 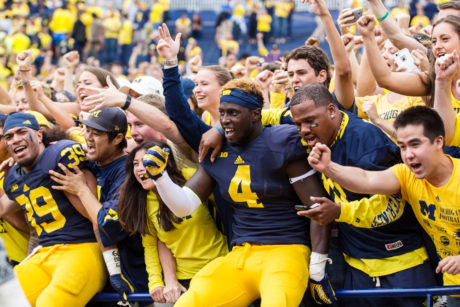 Michigan defensive end Reuben Jones has put his name into the transfer portal. As a rising fifth-year senior, he should be eligible to play elsewhere immediately, meaning there’s very little downside to him transferring.

END_OF_DOCUMENT_TOKEN_TO_BE_REPLACED

Steve Lorenz reported on Monday evening that redshirt junior offensive tackle Nolan Ulizio (who would be a fifth year senior in the fall) has entered his name in the transfer portal. As a graduate transfer prospect, he would be eligible to play at his new school immediately.