1. Brady Hoke.  The first year head coach has brought back a winning attitude and solid defensive play, things that were sorely missing for a few years.

2. Greg Mattison.  The new defensive coordinator, brought back to Michigan after stints with the Florida Gators and Baltimore Ravens, took last season’s defensive players, added a few freshmen, and concocted the #17 defense in the country.

3. Denard Robinson.  The quarterback looked shaky at the beginning of the season while adjusting to offensive coordinator Al Borges’s offense, but Robinson turned it on toward the end of the year.  He’s one of the most electrifying players in the entire country.

4. Mike Martin.  The nose tackle had an excellent year for Michigan, especially in the second half of the season.  More so than creating havoc inside, it was exciting to see the 6’2″, 304-pounder chase down plays from sideline to sideline.  Michigan hasn’t had a nose tackle this athletic in my memory.

5. David Molk.  The four-year starter at center won the Rimington Trophy, given to the nation’s top snapper.  It’s a well deserved award for a quick and intelligent lineman with an old-school attitude.

Thanks to all the Wolverines for working hard and giving us fans an exciting 2011 season.  Hopefully even better things are to come in 2012, including a Sugar Bowl victory against Virginia Tech on Tuesday.  Go Blue! 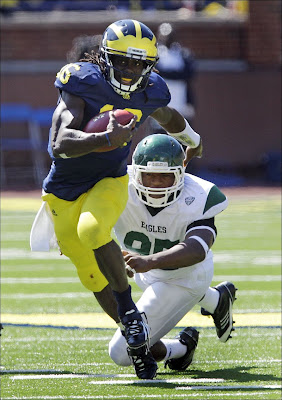 Check out what Sport Science  learned about Denard Robinson.

THE TAKEAWAY
Thomas is capable of excellent play; against Miami he went 23/25 (92%) for 310 yards and 3 touchdowns through the air, plus 2 more rushing scores.  He played some great football throughout the year.  But he’s coming off a game against Clemson in which he completed 50% of his passes, threw 2 interceptions, and rushed 12 times for only 2 yards.  Meanwhile, Robinson is one of the most dynamic players in the country, capable of taking over a game at any given time.  While he has been prone to interceptions and erratic passing, he’s coming off a three-game winning streak in which he completed 60% or more of his passes, scored 11 total touchdowns (5 passing with only 2 interceptions), and played arguably the best game of his career against Ohio State (14/17 for 167 yards and 3 touchdowns, plus 170 yards on the ground and 2 more touchdowns).  Thomas is good, but Robinson has the ability to be unstoppable.
Advantage: Michigan

I’m going to take a slightly different tactic this week than other weeks.  Heading into the bowl game, there’s no real reason to suggest personnel changes other than just for the hell of it.  If a guy is a starter now, he’ll probably be starting in the bowl game.  Michigan just beat Ohio State, I’m happy, and these are all positive awards today.

Offensive MVP . . . Denard Robinson.  He was 14/17 for 167 yards and 3 touchdowns with 0 interceptions. He ran the ball 26 times for 170 yards and 2 touchdowns.  The kid was patient in the pocket, stepped up in crunch time, and seemed more decisive in the running game than he has for most of the year.  This was an easy pick.

Defensive MVP . . . Ryan Van Bergen.  Van Bergen had 7 tackles, 2 tackles for loss, 1 pass breakup, and 1/2 a sack.  He was consistently causing trouble for quarterback Braxton Miller and running back Dan Herron, and he notched the tackle that pinned OSU to the goal line and allowed for a safety on the following play.

Offensive play of the game . . . Denard’s 41-yard touchdown run.  Not only did Denard make a good read in the running game, but he also looked quicker than he has in recent weeks and made Etienne Sabino look silly.  It was electrifying to see him have success against a defense that has smothered Michigan the past few seasons.  I think that play gave the players and the fans notice that the offense was going to be explosive the entire day.

Defensive play of the game #1 . . . Blake Countess’s pass breakup.  On 3rd-and-27 from their own 3-yard line, Braxton Miller launched a missile to DeVier Posey, who was streaking down the middle of the field.  Countess was trailing Posey and turned on the jets just in time to get a finger on the ball, knocking the pass down.  Even though a holding penalty in the endzone would have negated the gain, Countess didn’t know that when he was making the play.  That was a potential 97-yard touchdown pass that surely would have taken some of the wind out of Michigan’s sails.

Defensive play of the game #2 . . . Courtney Avery’s interception.  For a nickel corner to be tied for the team lead with 2 interceptions, that’s a pretty good job for Avery.  He could probably be starting for this team at one of the outside corner positions, but he’s aggressive and physical in the slot and that physicality paid off.  On a last-gasp pass for Ohio State, Avery knocked down wide receiver Devin Smith and then launched himself through the air to pick off the pass.  It was 4th-and-6 so the interception wasn’t much different than a simple incompletion, but it was a great play nonethelesss.