END_OF_DOCUMENT_TOKEN_TO_BE_REPLACED

Keyshon Camp – DT – Lakeland (FL) Lake Gibson: Camp is a 6’3″, 269 lb. prospect with offers from Alabama, Florida, Miami, Michigan, Oregon, and UCLA, among others; he committed to USC in June. He’s a 247 Composite 4-star, the #20 defensive tackle, and #174 overall. A former teammate of Michigan freshman Reuben Jones, he is also coached by former Michigan offensive lineman Ricky Barnum. This is his official visit.

Caleb Kelly – LB – Fresno (CA) Clovis West: Kelly is a 247 Composite 5-star, the #2 outside linebacker, and #16 overall. He has offers from Alabama, Michigan, Notre Dame, Oklahoma, Oregon, UCLA, and USC, among others. He visited Michigan this spring and the coaching staff has been after him hard, but his leader is thought to be Oklahoma. He is committed to the 2016 U.S. All-American Bowl. This is his official visit.

Hit the jump for a number of other visitors.
END_OF_DOCUMENT_TOKEN_TO_BE_REPLACED

Michigan is “in a submarine” during fall camp, but they are occasionally allowing outsiders in to watch the boring practices or parts of practice. Here are some players who are headed to Michigan this weekend to watch some practices: 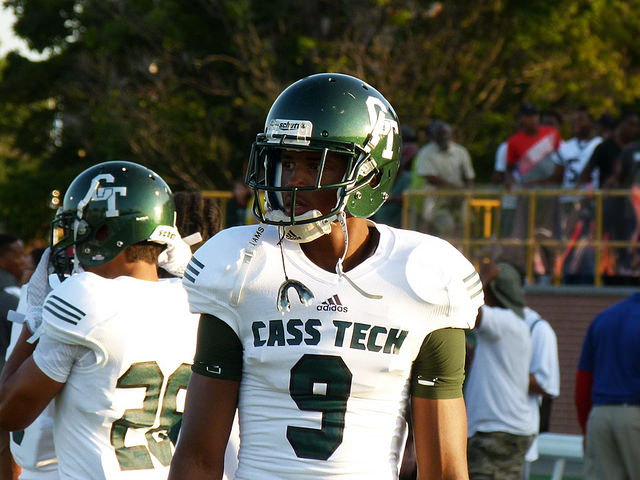 
K.J. Hamler – WR – Orchard Lake (MI) St. Mary’s: Hamler is a 5’9″, 155 lb. prospect with offers from Michigan, Michigan State, and several others. He’s a 247 Composite 3-star, the #45 wide receiver, and #279 overall. While he has the size to also play cornerback, he wants to play offense, although he would have to be a slot guy and maybe a kickoff returner. He is considered to be a Michigan State lean.

Jaylen Kelly-Powell – S – Detroit (MI) Cass Tech: Kelly-Powell is a 6’0″, 183 lb. prospect with offers from Michigan, Minnesota, Northwestern, and Pitt, among others. He’s a 247 Sports 4-star, the #13 safety, and #187 overall. He claims a 4.49 forty. Named after former Michigan basketball player Jalen Rose, Kelly-Powell is considered a Michigan lean.


Donovan Peoples-Jones – WR – Detroit (MI) Cass Tech: Peoples-Jones is a 6’2″, 183 lb. prospect with offers from Alabama, LSU, Michigan, Michigan State, and Ohio State, among others. He’s a 247 Sports 4-star, the #3 wide receiver, and #12 overall. He is pretty quite on the recruiting scene despite picking up numerous big-time offers, but he does have a family connection to Michigan, since his father played for the Wolverines in the 1990s.


Joshua Ross – LB – Orchard Lake (MI) St. Mary’s: Ross is a 6’1″, 210 lb. prospect with offers from Michigan, Michigan State, Notre Dame, Ohio State, and Oklahoma, among others. He’s a 247 Sports 4-star, the #3 inside linebacker, and #116 overall. A teammate of Hamler (see above), Ross is the younger brother of Michigan senior linebacker James Ross III; because of that reason, he is thought to be a Michigan lean.


Allen Stritzinger – RB – Warren (MI) De La Salle: Stritzinger is a 6’0″, 183 lb. prospect with offers from Cincinnati, Michigan, and a few MAC programs. As a sophomore in 2014, he ran the ball 244 times for 1,356 yards and 20 touchdowns, and he added 9 receptions for 238 yards and 1 touchdown. He attends the alma mater of junior quarterback Shane Morris and redshirt freshman Jared Wangler.

Ambry Thomas – CB – Detroit (MI) King: Thomas is a 5’11”, 165 lb. prospect with offers from LSU, Michigan, Michigan State, Ohio State, Penn State, and Tennessee, among others. He’s a 247 Sports 4-star, the #11 cornerback, and #150 overall. He was considered to be a slight Michigan State lean, but several new programs have thrown their hats in the ring recently and he may be openly considering his options.

Here are the players who have been offered by Michigan: