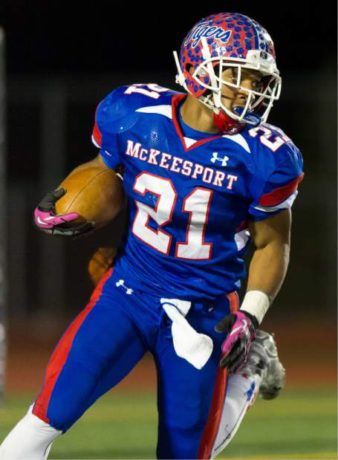 END_OF_DOCUMENT_TOKEN_TO_BE_REPLACED

Ashburn (VA) Stone Bridge offensive guard Andrew Vastardis committed to Michigan as a preferred walk-on (LINK). Also, if you’re looking for a list of preferred walk-on offers, they’re right there on the message board (LINK).

Fort Lauderdale (FL) St. Thomas Aquinas running back Mike Epstein, an Illinois commit, was offered by Michigan. Epstein is a 6’0″, 185 lb. prospect who also has offers from Cincinnati and UCF, among others. He’s a 247 Composite 3-star, the #74 running back, and #894 overall. Epstein committed to the Illinois back in August. The Wolverines have offered several of Epstein’s teammates to the point where there are too many to bother naming. Epstein is a small-ish back who runs tough despite not having great size.

Fort Lauderdale (FL) Dillard defensive tackle Jon Ford was offered by Michigan. Ford is a 6’5″, 240 lb. prospect with offers from Florida State, Miami, Ohio State, and South Carolina, among others. He’s a 247 Composite 4-star, the #10 strongside end, and #282 overall. The Wolverines also offered teammate Jordan Wright (see below), and both join wide receiver Jordan Merrell with Michigan offers, though Merrell is a Cincinnati commit.

Deerfield Beach (FL) Deerfield Beach wide receiver Jerry Jeudy was offered by Michigan. Jeudy is a 6’1″, 174 lb. prospect with offers from Alabama, Auburn, Clemson, Florida, Florida State, Georgia, LSU, Notre Dame, Ohio State, and USC, among others. He’s a 247 Composite 4-star, the #6 wide receiver, and #36 overall. Jeudy is a speedster who had 28 catches for 345 yards and 7 touchdowns as a junior in 2015. He attends the alma mater of former Michigan star Denard Robinson.

Hit the jump for a lot more news.

END_OF_DOCUMENT_TOKEN_TO_BE_REPLACED 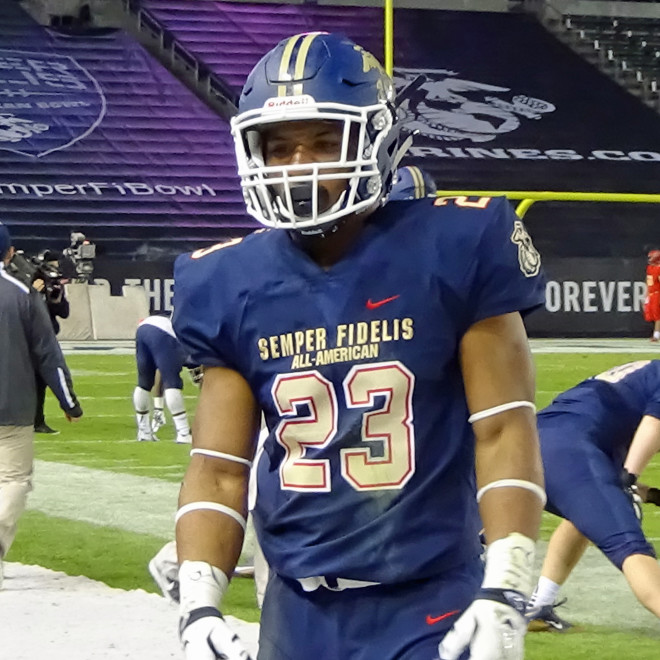 Strengths: Solidly built . . . Strong lower body . . . Excellent balance when running the ball . . . Runs behind his pads . . . Good speed . . . Quick feet . . . Good lateral quickness . . . Accelerates quickly out of cuts . . . Willing and capable blocker . . . On defense he shows good fundamentals . . . Disciplined defender, not a freelancer . . . Strong for his size at point of attack . . . Good force player able to keep contain . . . Solid blitzer who can be both physical and elusive to block . . . Aggressive tackler

Weaknesses: Lacks the elite speed to play corner . . . More of a zone defender than a man coverage guy . . . A little undersized to play linebacker . . . Can get overwhelmed by linemen at point of attack if playing inside . . . Would need to improve footwork through the hole as RB on offense . . . Lack of height could be an issue against tight ends and taller receivers

Projection: Strong safety/outside linebacker. Hudson is the definition of an “athlete” when you’re thinking about recruiting. He is a guy who could fill many roles, and so you just want to get him on campus, see how he fits on the field, and maybe plug him in where you have a talent deficiency. For a lot of programs – including Michigan’s – I think he fits in best as a strong safety/outside linebacker hybrid. He was excellent in that role during the Semper Fi All-American Bowl, making tackles all over the field, breaking up passes in the flat, etc. Jabrill Peppers played that role this past season for the Wolverines, and he was excellent at blowing up screens, supporting the run, and defending the flat. Hudson isn’t quite as fast or athletic, but not many people are. I also think Hudson has good enough quickness, balance, and toughness to make an impact at running back.

Reminds me of: Brandon Harrison. Harrison may have disappeared from your memory by this point, but he played at Michigan from 2005-2008 and bridged the coaching transition from Lloyd Carr to Rich Rodriguez. Harrison (5’8″, 193 lbs.) was smaller than Hudson and maybe a smidgen faster, but the former played some box safety for the Wolverines under Rodriguez. In his one year after Carr departed, Harrison made 69 tackles, 7 tackles for loss, 3 sacks, and 3 pass breakups.

Likelihood of committing to Michigan: Hudson took his official visit to Michigan last weekend, is visiting Penn State this weekend, and will be at Pitt next weekend. He lists Michigan as “Warmer” on his 247 Sports profile, and the 43% of Crystal Ball choices in Michigan’s favor represent a plurality. It would be a minor upset if he chose either of the home-state schools, who look like the only other remaining threats.

Site note: If you want to create/use an avatar for posting and discussion purposes, check out my forum post on how you can create one (LINK).

Here’s a look at the next wave of visitors headed to Ann Arbor for the first weekend visit opportunity after the dead period.

GRADUATE TRANSFER
Texas center Jake Raulerson is a 6’4″, 295 lb. graduate transfer prospect. He was a backup this past season, and he started five games in 2014. As a redshirt sophomore this past season, he would have two years to play at his next destination. Michigan also recruited Raulerson out of high school in the 2013 class.

2016
Nixa (MO) Nixa tight end Chase Allen is a 6’7″, 221 lb. prospect with offers from Florida State, Michigan, Minnesota, and Missouri, among others. He’s a 247 Composite 3-star, the #26 tight end, and #571 overall. Michigan recently offered Allen, but the staff piqued his interest with their use of the tight end position. There’s a good chance that Allen ends up committing to Michigan soon. I posted a scouting report on Allen on Thursday (LINK).

Bradenton (FL) IMG Academy linebacker is a 6’3″, 227 lb. prospect with offers from Akron, Mississippi State, and Tennessee, among others. He’s a 247 Composite 3-star, the #12 inside linebacker, and #359 overall. He does not have an offer from Michigan at this time, but since the Wolverines are in a questionable situation when it comes to linebacker depth, he could be in line for one. Dublanko is a teammate of 2016 tight end Isaac Nauta (Georgia). EDIT: Dublanko is now scheduled to come next weekend instead.

END_OF_DOCUMENT_TOKEN_TO_BE_REPLACED

ADDED TO THE (NON-EXISTENT) BOARD: GRAD TRANSFERS
Texas center Jake Raulerson announced his plans to transfer. Although he’s just three years out of high school, he will have his degree and be a grad transfer, so he has two years of eligibility remaining with an opportunity to play immediately. He started five games in 2014, and he played in eight games in 2015 with no starts. He plans to take an official visit to Michigan on January 15. On Michigan’s end, the only loss this off-season is starting center Graham Glasgow. If Raulerson were to choose Michigan, he would mark the fourth grad transfer in Michigan history, joining QB Jake Rudock, safety Wayne Lyons, and punter Blake O’Neill.

ADDED TO THE BOARD: 2016
Miami (FL) Columbus defensive end Joshua Uche was offered by Michigan. He’s a 6’2″, 212 lb. prospect with offers from Alabama, Auburn, Florida, Miami, and North Carolina, among others. He’s a 247 Composite 3-star, the #47 weakside end, and #707 overall. As a senior in 2015, he made 50 tackles, 14 sacks, 2 forced fumbles, and 3 pass breakups. Uche is being recruited by new defensive coordinator Don Brown, and he has an opening for an official visit during the weekend of January 15. Michigan is also recruited Uche’s 2017 teammate, cornerback Trajan Bandy.

Hit the jump for a prospect who committed elsewhere and some random bits.