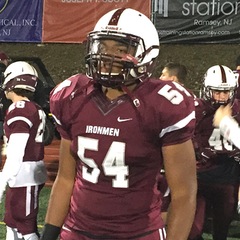 Logan Christopherson – TE – Lemont (IL) Lemont: Christopherson is a 6’6″, 216 lb. prospect who committed to Missouri last week. He’s a 247 Composite 3-star, the #33 tight end, and #761 overall. He was supposed to visit Michigan on June 11, but I haven’t heard whether his recent commitment means his visit plans are over or not. Lemont is the alma mater of former Michigan Rimington Award winner David Molk.

Jamyest Williams – CB – Loganville (GA) Grayson: Williams is a 5’9″, 170 lb. prospect with offers from Clemson, Florida State, Georgia, Ohio State, South Carolina, and Tennessee, among others. He’s a 247 Composite 4-star, the #6 cornerback, and #55 overall. A recent transfer from Lawrenceville (GA) Archer, Williams was in Detroit for the Sound Mind Sound Body camp and made his way over to Michigan’s campus. He took the same trip last year and subsequently eliminated the Wolverines from his top lists, so it’s either a sightseeing trip or he has renewed his interest in the Wolverines after what he has seen Jim Harbaugh do. Regardless, he’s a longshot to end up as a Wolverine. One of his teammates at Grayson will be 2017 running back commit Kurt Taylor, who is transferring from Covington (GA) Newton.