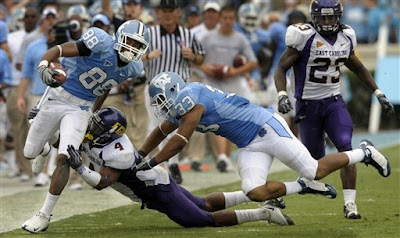 Christian Wilson (#33)
Christian Wilson, a 6’3″, 235 lb. running back/tight end from McKees Rocks, PA, committed to Michigan back in 2007. He was expected to be a part of the class of 2008 after Lloyd Carr convinced him that he could play an H-back role in Mike Debord’s offense. It’s somewhat odd that Carr would recruit a guy for a position that didn’t really exist when he probably knew that he wouldn’t be there past the 2007 season.

Regardless, the hiring of Rich Rodriguez forced Wilson to rethink his options. Rodriguez honored the offer and told him that he could play linebacker, but Wilson wasn’t interested. He pictured himself as an offensive player, but Wilson would only fit Rodriguez’s offense as a fullback . . . and Rodriguez molds his fullbacks out of walk-ons.

Wilson took the hint and opened up his recruitment. He committed to North Carolina and played as a freshman. He caught 2 passes for 19 yards as a true freshman in 2008 and added 5 more catches for 30 yards in 2009.

Michigan’s starting fullback in 2009 was Kevin Grady, who notched 10 carries for 80 yards and 1 touchdown. He also caught 5 passes for 29 yards.

Grady was probably a better player for Michigan’s offense, but moving forward, the fullback duties will fall to fifth year senior Mark Moundros and redshirt junior John McColgan. It would be nice to have an athlete of Wilson’s caliber to play fullback, but considering the fact that a former 5-star running back in Grady only touched the ball 15 times, committing a four-year scholarship to a fullback might not make a great deal of sense. It would be nice to have an extra inside linebacker on the roster, but if Wilson didn’t want to play defense, he probably wouldn’t be great at it, anyway.