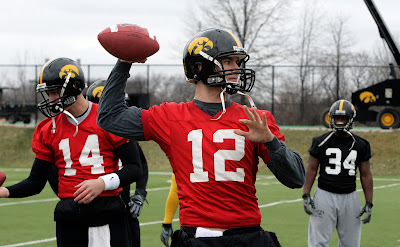 John Wienke: No, not the one throwing the ball
Briefly, John Wienke was a part of the class of 2008. He committed to the Wolverines on July 1, 2007. He was a 3-star quarterback coming in a year after Ryan Mallett, and why would a surefire star want to follow Mallett so closely just to sit on the bench? The coaches didn’t set their sights too high, and they landed Wienke, a decent but middling recruit.

Then Lloyd Carr retired, Rich Rodriguez was hired in December, and the writing was on the wall. Before the ink dried on Rodriguez’s contract, the lefty quarterback was out the door to be an Iowa Hawkeye. With his 6’5″, 215 lb.-and-growing frame, nobody thought he’d stick around to be a human victory cigar, a la David Cone or Darko Milicic. He was a pro-style pocket quarterback for an offense that produced the NCAA’s all-time leading rusher for quarterbacks in Pat White.

For the time being, Wienke has been doing the same thing at Iowa as he would have at Michigan. Wienke redshirted in 2008 and played third fiddle in 2009, failing to throw a pass all season. Wienke’s departure was the most tenable of the class of 2008’s decommits. It was best for both parties. And judging from recent quarterback play at Iowa, he will likely take over whenever Ricky Stanzi leaves and play decently until he fades away into obscurity like Drew Tate and Brad Banks . . . and every other Iowa quarterback.

Seriously, has any good quarterback ever come out of Iowa? Chuck Long won the Heisman back during Prohibition, but if they were any worse at producing NFL quarterbacks, their mascot would be Brutus. Even Indiana had Trent Green.