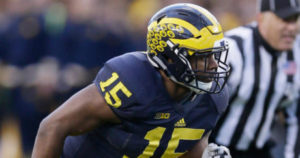 This week I was able to talk to former Michigan linebacker James Ross III.  He played for the Wolverines from 2012-15, had some looks at the NFL level, and now coaches at Detroit-Loyola.  He played his high school ball at Orchard Lake St. Mary’s Prep, where he was part of the 2011 state championship team.  Ross was very open and spoke an length about his experience playing and coaching football in Michigan.

When did you know that you wanted to be a Wolverine?  Obviously you grew up in Michigan, which helps, but was there a definitive moment in your recruitment that helped you decide?

Yes.  Right when I got offered I started really thinking about Michigan.  I never really was a college football fan because I played multiple sports, and I was just so busy.  I never really got a chance to sit down and watch football.  My dad was a super Michigan fan, but I played hockey before I played football.  I also played baseball.  I was busy year round, and was more a fan of my dad being a fan.

When I committed during the summer of my junior year, I was also feeling Penn State a little bit.  A couple guys from Orchard Lake-St. Mary’s Prep were going there. But once I left the visit, the excitement went away.  I really had to sit down with my dad and my mom and ask questions like: “What do I really want in a school?  Why is Penn State so important that I should skip over a powerhouse in my backyard?”  Once I put everything in perspective there was no other place I’d be rather go to than Michigan.

How did your weekly preparation for games evolve during your four years at Michigan?  Lots of players talk about the game “slowing down” for them.  Did you feel this too?

Going into Michigan, I felt like I had a lot to prove.  I was an undersized linebacker, I was not projected to be a starter, or even make much of an impact.  That chip on my shoulder helped me a lot with my preparation.  I just wanted to be the best I could be.  I was excited to play a lot as a freshman, and start as a sophomore.  I watched lots of film of the guys I was going against, because you have to find a way to get an advantage.

Quick story:  My first game was against Alabama, and I was second on depth chart.  In high school, second on the depth chart means you only play if someone gets hurt, so I wasn’t expecting to see much action.  Then all of the sudden I’m playing against these guys I was looking up to the year before like Eddie Lacy and DJ Fluker.  It was a surreal moment, but it let me know that I had to be prepared to play week in and week out.

I took that experience to the film room to find tendencies.  My junior and senior year I had to revamp the way I looked at the film because they switched my position to outside linebacker, or the SAM.  I had to look more at the tight ends and the tackles and see the kick out blocks.    Coach Mattison and Coach Durkin helped me learn how to watch film.  They’d say, “Are you watching film, or is the film watching you?” If you’re not looking at right keys that will help you in the game, there is no reason to watch film.  They helped me develop that trait.

Mobile quarterbacks can enrage fans because they can gain a bunch of yards on a scramble against an otherwise solid defense.  Can you specifically talk about preparation for teams with mobile quarterbacks?

It is different because the QB can hurt you, even on a busted play.  You have to put emphasis on containing that guy.  You have to be able to get off blocks, and it changes your preparation quite a bit.  We’ll have some mobile guys play quarterback [in practice], but you still can’t really simulate the look.   Guys to the best that they can do.  It is actually pretty difficult.   At Loyola, we have a mobile quarterback that we’re going up against at Detroit Central.  You have to work on containment and rush lanes.

You were part of a senior class that faced some adversity in 2014, but ultimately ended your careers on a high note, winning 10 games and beating Florida in the Citrus bowl.  Can you talk a little bit about the mentality of that senior class?

I’ll put all of that on Harbaugh.  He changed the culture of the team.  The year before we weren’t bowl eligible, so a lot of guys were in need of change.  We got the right change, and he established this work first, blue collar mentality.  It was all about work.  He enforced the 4 hour spring practices.  Guys were too comfortable, and he made us uncomfortable.  There were some guys that weren’t happy about it, and those guys kind of disappeared.  But the guys who bought in and stuck together were big parts of that team.

It was very difficult, but at the same time Harbaugh made success attainable.  He showed us that if we buy in, that you will see results.  It went along with the idea that “Those Who Stay Will Be Champions.”  You hear that so much at Michigan it kind of becomes a cliche.  Once you start seeing the results of the work, you really believe it.

I still talk to guys like Jarrod Wilson, and Willie Henry, and now we’re expecting big things from the team.  Harbaugh is the kind of guy who will produce great things.  He enforced that culture, that way of playing, each and every day.  The way you come to practice matters, and how you approach the classroom matters.   As far as the seniors go, we definitely stuck together, and we lead the younger guys to follow in that system and it’s paying off now.

Which Big 10 stadium (other than The Big House) was the most fun to play in?  Why?

It was always fun playing at Michigan State and Ohio State.  Just being able to face all that adversity, and all those fans rooting against you.  When I was a freshman the craziest stadium I played in was Nebraska.  The blackshirts were surreal.  It felt crazy.  Everyone was super loud and dressed in black.  You’re not expecting that coming straight from high school.  You’ve played in front of, at the most, 5,000 fans, and to jump into an 80,000+ stadium is really crazy.  My favorite stadium of all time is obviously Michigan, but in terms of away venues, it is Nebraska.

What were your most memorable individual plays?  Or games?

I’ll tie both of those together.  It was the Minnesota game my senior year.  We started off down, and picked it up late.  We had the lead late in the game and had to keep it.  On that final goal line stand, we busted that first play a little bit, and a guy was supposed to take the tight end, but missed the assignment.  I saw it, and had to cover him, and if I didn’t pick him up he would have been wide open.  The quarterback had to throw the ball away.  On the next play we stuffed the quarterback run, and that was all the guys upfront.  That was probably my most memorable game that I played in.  It meant so much to us because at that point it was our whole season.  If we lose that game, it would end the conversation about the playoffs.

In Part 2 tomorrow, James Ross answers your questions and talks a little bit about his new job, coaching high schoolers at Loyola.