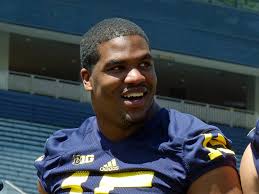 This is Part 2 my interview with James Ross III. You can find part 1 here (LINK).  He answers the questions you posed in the forum and a few of my own about his new job with Detroit-Loyola.  This weekend I’ll interview Kevin Koger – post questions for him in the forum link.

What did you learn from your coaches at Michigan (either on or off the field) that you can pass on to the Detroit-Loyola players?  Is there one or two people who influenced you the most?

I learned a lot when it comes to defense.   We had multiple defensive coordinators and run multiple defenses.  I feel like now I have a vast knowledge of all types of defenses and techniques.  I was able to learn the game from not only from my position, but from a team perspective as well.  There were a lot of guys that played a part in that.  Coach Mattison explained his defenses in a way that really helped me understand team concepts.  Coach Durkin really helped a lot, too.

How did your approach to the game in high school evolve?  When did you know you had a chance to play Division 1 football?  How will that experience affect your approach to your players at Detroit-Loyola?

My freshman year in high school I played little-league [football in Detroit].  This little league is pretty well known in the city of Detroit.  Jourdan Lewis, Desmond King, Malik McDowell, [and] all the top guys from Detroit usually came from this one little league team.  It helped me prepare for high school.

We had direct contact with Larry Foote.  Larry helped me out a lot in my transition to linebacker.    I started as a sophomore at linebacker [at OLSM], and had a decent season.   In the state title game I finished with 16 tackles.  After that game I got offers from Michigan, Michigan State, and Cincinnati.  So before that, it was more about consistent work.

What were the biggest challenges in the transition from Hoke to Harbaugh?

We had higher expectations.  Coach Hoke is a great guy, but Coach Harbaugh came straight from the NFL and took that NFL approach.  We had to find a way to figure out his system, and every single day we had to come to practice with “enthusiasm unknown to mankind.”  That mentality was a challenge for a lot of guys, but a majority bought into the system.   That NFL culture and approach was the biggest challenge.  We were too comfortable in the offseason, and Coach Harbaugh made us uncomfortable.  It was better for us in the long run.

What advice would you offer to your brother?  Obviously a lot of brothers play together, but it is pretty rare that two brothers play the same position under the same coaching staff.  Is there anything you would change in hindsight?

I tell my brother to take advantage of every opportunity.  Especially when it comes to academics.  Athletes are in school year round, so you have an advantage over normal students there.  Take as many credits as you possibly can, and try to graduate in 3 years.

Athletically I would say that it is a short 4 or 5 years, and you want to get the most out of it you possibly can to put yourself in a position to be a top pick or a serious NFL contender.  Don’t think you time will be more valuable going out and partying.  There is a time and a place for that, but that’s not what college is about.  You have to take advantage of the opportunity.  You have to work every single day to reach your goals.  College football is for guys who are trying to reach that next level.  Don’t stray away from that goal.  Stay focused on the tasks at hand.

What are the biggest differences in skill-set between LB positions (e.g., MIKE, WILL, SAM)?

My brother and I are watching the combine now, and you see the different body styles and the different playmakers.  Nowadays you have to be able run with fast backs and tight ends in coverage, and be able to hit at the same time.  In a 3-4 scheme your MIKE and WILL are the inside backers.  They have to be able to run and hit.  A MIKE is more of a compact player.

When you’re talking about SAM, you’re talking about a guy with more range, longer arms, and can extend off the tackle’s block and hold the edge. That was my biggest issue – I’m not built to be a SAM.  That hurt me in my NFL run.  Outside guys should be able to rush the passer and set the edge.  It should be comfortable for them; they shouldn’t have to work too hard to get that done.

I still have one more shot left in the NFL, though.  I’m going to the spring league, which is a new league for free agents.

I don’t think I’m alone in wishing James Ross III all the best in his next attempt at making an NFL roster.  The boys at Loyola are lucky to have a quality leader on their staff.