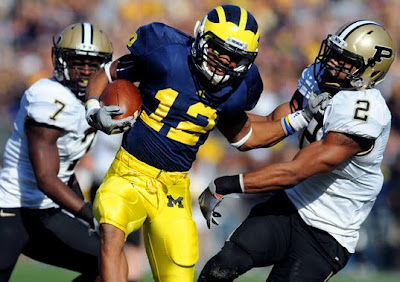 I have to admit, I didn’t expect much out of Roundtree in 2009. He had a spectacular spring game prior to the 2009 season, but with Martavious Odoms returning and what seemed to be a solid tight end in Kevin Koger, it looked like Roundtree wouldn’t get many reps. And for the most part, that held true. Late in the season, however, Odoms was injured, the coaches had lost confidence in Koger’s ability to catch the ball, and Plan C Kelvin Grady had some drops, too. So they went to Plan D. Plan D turned out to be awesome, as Roundtree’s late TD catch against MSU gave Michigan some false hope of winning the game. He went on to catch 30 passes over the last four games.

Roundtree enters 2010 with designs on being the #1 option for the Wolverines at receiver, although it’s unclear whether he’ll get more chances at slot receiver or at wideout. He’s not particularly fast or elusive, but he’s got that “it” factor that allows him to get open. He runs good routes, and he’s also developed a chemistry with not one, but both quarterbacks. Sometimes that’s all you need. With Michigan’s surplus of talent at the receiver positions and the questionable nature of its tight end situation, I expect a lot of four-wide sets, especially on obvious passing downs. This would likely put Darryl Stonum and Junior Hemingway on the outside, allowing Martavious Odoms and Roy Roundtree to work in the slot. The upcoming season should be the most exciting and productive passing year since Rich Rodriguez arrived in 2008.

Ryan Van Bergen earned 44% of the vote, and J.T. Floyd got 28% of the vote. Roy Roundtree was third with only 13% of the vote. Come on, people – look at all the depth we have at the receiver positions!