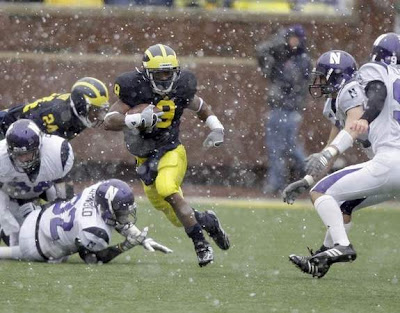 When I think of the beginning of the Rich Rodriguez Era at Michigan, I think of Odoms. Even though Odoms wasn’t the only player Rodriguez added to the Class of 2008 when he took over, he was the most successful and at times the most frustrating. He had an up-and-down freshman season in ’08, where he led the team in receptions but also had fumbling problems and muffed several punts and kickoffs. Of course, normal teams would have had enough depth to put an upperclassman in his spot, but Rodriguez’s other option was the misplaced and disgruntled Toney Clemons. Last season Odoms was involved a little less in the offense due to the emergence of Kelvin Grady and Roy Roundtree, who combined for 43 catches. However, he had the game-winning touchdown reception against Indiana and did the following, which endeared him to many Michigan fans:

Broken play? Not a problem. Here, let me go run full-speed into the middle linebacker, get knocked down, then get up and chase down the play to try to block someone else!

Adding to the awesomeness, Odoms was fast enough to nearly catch Denard Robinson from behind after getting knocked down – he reportedly beat Robinson in the spring’s Fastest Man Competition. I guess that’s why the University of Miami (FL) tried to give him a track scholarship out of high school.

Anyway, Odoms is a great glue player. He’s not a superstar, but he’s versatile and gives a superb effort. He won’t juke many defenders out of their shoes, but he will try to accelerate through tacklers and split defenders who might misjudge his speed. I’ll take a kid like that any day of the week. However, fellow slot receiver Roy Roundtree emerged toward the end of the season to lead the team in receptions, racking up 30 in the last four games. I expect to see a lot of four-wide sets with Junior Hemingway, Darryl Stonum, Roundtree, and Odoms this fall. That gives the team a good possession receiver (Hemingway), a deep threat on the outside (Stonum), a guy who can get open over the middle of the field and get deep (Roundtree), and a good bubble screen guy (Odoms). There are also rumors that Roundtree and Odoms will see time at wide receiver, not just in the slot. If the quarterback play is consistent, Michigan’s receiving corps should be a bright spot in the 2010 season.