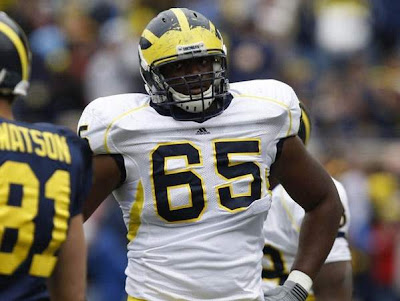 Name: Patrick Omameh
Height: 6’4″
Weight: 299 lbs.
High school: St. Francis DeSales High School in Columbus, OH
Position: Offensive guard
Class: Redshirt sophomore
Jersey number: #65
Last year: I ranked Omameh #44 and said he’d be a backup offensive tackle. He was . . . until he started the last three games of the season at right guard. I also said he’d be in line to take over the left tackle job vacated by Mark Ortmann in 2010, but it looks like he’ll still be at RG.

Omameh was a lightly recruited defensive end prospect coming out of high school, garnering a late offer from the Wolverines once Rich Rodriguez took the helm. He was very light for an offensive lineman, but was 276 lbs. by 2009 and now weighs in at a svelte 299 lbs. He played sparingly at the beginning of last season, looking up at offensive tackles Mark Ortmann, Perry Dorrestein, and Mark Huyge. However, with the offensive line rejiggering triggered by the David Molk injury, Huyge moved inside to guard but couldn’t cut it inside. That’s when Omameh stepped in and took the RG position by the throat, looking powerful and athletic over the last three weeks, including tough opponents Wisconsin and Ohio State.

The departure of David Moosman leaves the right guard position as Omameh’s to lose. There’s a possibility that redshirt freshman Taylor Lewan might win the left tackle position, but otherwise, Michigan has six offensive linemen with starting experience (Omameh, Huyge, Dorrestein, Molk, Stephen Schilling, and John Ferrara). This gives Michigan an experienced unit that should be perhaps the strongest group on the offense. Omameh himself is perfectly suited to the athletic line play that is required for Michigan’s offense. He has the speed, agility, and power to get up to the second level and latch onto linebackers. Between fifth-year senior Schilling, veteran center Molk, and Omameh, Michigan should be able to run the ball effectively, no matter who wins the starting running back job by September 4th.

Only 17% of voters picked Omameh to be #19 in the poll. The leading vote-getter was Brendan Gibbons, with 20%.