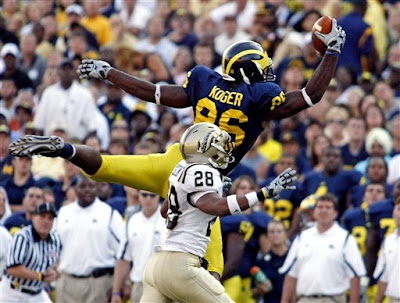 I can’t tell if Kevin Koger got to Michigan at the wrong time or the right time. On the one hand, if he played for Lloyd Carr, I think we’d be talking about an all-conference level player. Koger has speed and leaping ability, blocks well, and can make excellent catches. Carr would have used him well. On the other hand, Koger is a perfect fit for the spread offense run by Rich Rodriguez. He can get down the seam quickly, pull, block in space, and generally create problems for a defense. The only mitigating factor is that Rodriguez doesn’t use the tight end very much. Despite reports that Rodriguez and his staff had visited Oklahoma’s coaching staff to integrate the tight end more, Koger only caught 16 passes (1.3 receptions per game) and his backups only caught five passes for 63 yards, 47 of which came against Delaware State.

Forgetting about all that, Koger has the ability to be a very good tight end. He averaged 13.8 yards on his receptions last season, and the catch pictured above is one of the most amazing I’ve seen anywhere, let alone from a Michigan player. He did struggle with a case of the dropsies in 2009, and I’m sure he knows that’s an area he must improve. He’s an important part of the team because of his versatility, whether he’s blocking, catching passes, or lining up in the slot and creating mismatches. But with two somewhat inexperienced quarterbacks who are approximately 6′ tall, Koger isn’t likely to see a huge jump in his numbers this year.