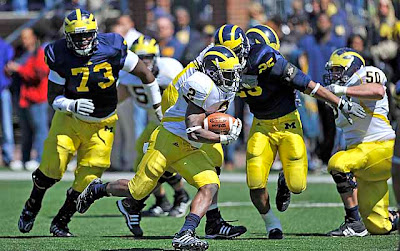 Campbell was a big-time recruit in 2009. He enrolled early in January 2009, but he was overweight and lacked technique. By the time the season rolled around, he had whittled himself down to about 318 lbs. Campbell mostly watched from the sideline except for a) blocking on the field goal unit and b) getting occasional short yardage or relief stints on the defensive line. He would alternate pushing centers around 1/3 of the time with getting pushed around by centers 2/3 of the time. In an ideal world, Campbell would have redshirted last year, but with the shortage of scholarship players – especially on the defensive line – there was virtually no choice but to play him.

By spring of 2010, Campbell put on another six pounds. He looked better in the spring than he did last fall, but his issues with consistency continue to linger. Despite being the heaviest guy on the team, he can’t just toss offensive linemen to the side at will. Technique is a problem, and for that reason, he will probably be a backup again in 2010. Junior Mike Martin is entrenched as a starter, and so is DT-turned-DE Ryan Van Bergen. Many people think Martin will bump from NT to DT in order to make room for Campbell, but that doesn’t fit the team best.

The first unit will be Van Bergen, Martin, and then Greg Banks at DT. The second unit will be Anthony Lalota/Jibreel Black at DE, Campbell at NT, and Sagesse at DT. That’s my prediction, anyway. Not only does that fit Michigan’s personnel best, but it also gives Campbell a chance to maintain his technique without getting too gassed. A fresh Campbell can be a disruptive force when those backups are on either side of him. Otherwise, a second line of Lalota/Black, Sagesse, and Banks would be somewhat unimposing.