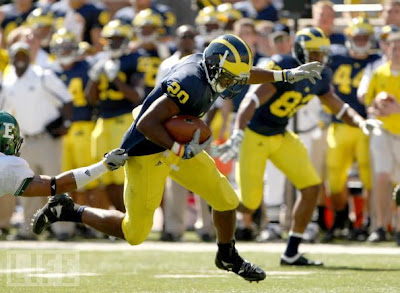 One thing Shaw has in spades is speed. He was a champion sprinter in high school, and he showed off that speed with a 48-yard run against Minnesota in 2008. Unfortunately, he pulled his groin and has had various nagging injuries since then. When completely healthy, he’s a big play waiting to happen. There’s definitely a role for him on this team. In fact, I’d like to see him get some reps at receiver. Oddly enough, he was listed as a wide receiver on the roster for his first two seasons on campus, but rarely (if ever) lined up anywhere but in the backfield. Now that he’s shown us his inability to break tackles . . . he’s listed as a running back. This kid could be excellent at running a bubble screen and getting out on the edge. Regardless, he’s a decent option at superback, but a good Big Ten team has to have a running back who can break few tackles. That’s why Shaw will be watching Michael Cox get the majority of the handoffs this season.

Addendum: There have been rumors floating over the past few days that Shaw may be ineligible for the 2010 season. He’s finishing up summer school in the next two weeks. As a potential starter, I can’t imagine he would do anything less than pass his class(es) with adequate grades to play. But there’s at least a chance that Shaw won’t be on the field this fall.